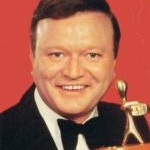 Days Of Our Lives stars Bill Hayes and Susan Seaforth Hayes, who have featured in the series on and off for almost 50 years and married both on and off screen, were honoured at the Daytime Emmys with Lifetime Achievement Awards. 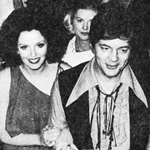 In their acceptance speech they acknowledged the support of various daytime TV hosts in their home country, and also Australian friends Bert Newton and Anne Wills.

The Days Of Our Lives stars were popular guests at the TV Week Logie Awards (pictured) in 1977, hosted by Newton. They were later guests on Newton’s morning radio show and also toured Australia, including a visit to Adelaide where multi Logie winner Wills had interviewed them and hosted fan events.

Days Of Our Lives, now in its 53rd year in production, is broadcast in Australia on the Arena channel on Foxtel and in regional areas on free-to-air on WIN Eleven.

Permanent link to this article: https://televisionau.com/2018/05/bert-newton-and-anne-wills-in-emmys-speech.html