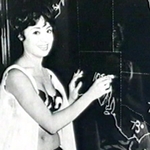 For 50 years, Anne Wills has been an icon of Adelaide. From early beginnings as a contestant on NWS9‘s Telethon Quest she was soon appointed as weather presenter for NWS9 in 1965.

She famously made front page news when she promised that she would wear a bikini on screen if the temperature hit 100 degrees fahrenheit (37.8°C) and came good on that promise when the mercury later hit 105.3 degrees (40.7°C).

She worked alongside Ernie Sigley on Adelaide Tonight and later with Sandy Roberts and Bob Francis on ADS7‘s The Penthouse Club. She hosted her own show, Movie Scene, for 17 years. 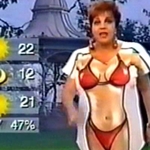 She hosted daytime shows including the popular AM Adelaide, appeared on telethons and was still presenting the weather 30 years after donning the bikini.

Outside of Adelaide, she appeared on programs including Beauty And The Beast, The Bert Newton Show and Good Morning Australia.

And she won Logies. Heaps of them. From an era when the TV Week Logie Awards presented state-based awards, ‘Willsy’ won a record 19 of them for her popularity in South Australia. No other individual — not even ‘The King’ Graham Kennedy — has collected as many Logies. 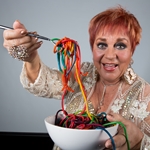 Next month, Willsy will be appearing in Adelaide’s Feast Festival to share the joys, the dirt, the pain, the glamour and possibly even the earrings of 50 years in the spotlight. Willsy: The Gay Divorcee (Well, Sort Of…) features Willsy “in conversation” with local ABC radio host Peter Goers in three shows at Queer Nexus, Lion Arts Centre, corner Morphett Street and North Terrace, Adelaide.

Permanent link to this article: https://televisionau.com/2014/10/anne-wills-for-adelaides-feast-festival.html