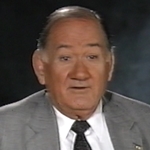 Sir Nicholas Shehadie, former chairman of SBS, has died at the age of 92.

Born in Sydney of Lebanese descent, Shehadie developed an early interest in sport and was picked for the Randwick Rugby Club at age 15. He went on to play 30 Tests and 100 games for Australia, and captained the Wallabies.

From 1981 to 1999, Shehadie was chairman of SBS, leading the multicultural broadcaster through its early years as well as defending SBS against a proposed merger with ABC in the mid-1980s and seeing SBS television go from a Sydney and Melbourne channel to a national network.

Deeply saddened to hear the news of Sir Nicholas Shehadie AC OBE, passing away. Was the @SBS Chairman 1981-99, 18 yrs and instrumental in our formation. A great Australian on many levels. Thoughts are with Marie Bashir and their family.

Over his career, Shehadie had also been chairman of the Sydney Cricket Ground, TAFE and NSW Rugby Union and president of the Australian Rugby Union.

The NSW Government is offering his family a state funeral.

Permanent link to this article: https://televisionau.com/2018/02/obituary-sir-nicholas-shehadie.html