It’s been a privilege. Thank you and good night. pic.twitter.com/Sjy4JMqdbS 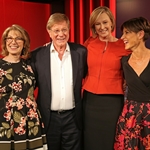 The final edition had host Emma Alberici joined by former Lateline hosts Kerry O’Brien, Maxine McKew and Leigh Sales (and with apologies from an absent Tony Jones, who is overseas) to talk about their favourite  moments from the show.

Lateline began on ABC on Tuesday 13 February 1990, competing against Seven‘s new high-profile Tonight Live With Steve Vizard and the revamped news program Coast On Coast on Nine. There was no pay TV, no internet and no smartphones.

It initially ran Tuesday to Thursday nights with O’Brien and promised a new angle on current affairs television with a focus on serious commentary, international affairs and satellite interviews with some very significant political players and world leaders.

In more recent years Lateline was bumped to an earlier timeslot, 9.30pm (Eastern), over on the ABC News channel while maintaining its  traditional 10.30pm timeslot as a replay on ABC.

The axe to Lateline comes as ABC has also made cuts to radio current affairs programs The World Today and PM.

The final episode of Lateline is currently available on ABC iView until 7 January 2018.

Permanent link to this article: https://televisionau.com/2017/12/lateline-bids-farewell-after-28-years.html