Melissa waves goodbye
Since taping her last Home And Away scenes in July, Melissa George (pictured) has been busy with new ventures and has invested her three years’ salary from the show wisely. The 20-year-old has already built up an investment portfolio, including properties in New South Wales and Queensland, antiques and a growing corporate profile. She has just returned from the UK where she has discussed plans for a department store to sell her nightwear range, An Angel At My Table, and is currently working on a lifestyle video, tentatively titled Mind, Body And Soul, for the teenage market. “I’ve diversified my talents, because I’m not going to depend on one thing,” she told TV Week. “I want several options to work on, so that if something doesn’t work out, I can turn my attention to another project.”

Emma fights back
Emma Harrison is back on the set of Neighbours after a four-week break, amid rumours and speculation that she had been sacked. “There were things written about me that were untrue and I’d like to just get on with my job and put all that behind me,” she told TV Week. She denies rumours that she has been unpopular with the other cast members. “I get along with everyone in the cast. Both the cast and crew and great to work with.” Harrison has also expressed regret at some of the cast changes taking place around her, in particular Caroline Gillmer leaving the show. “I’m going to miss Caroline a lot She’s a wonderful person and the most gorgeous actress.” 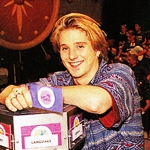 Diarmid puts his best foot forward
Diarmid Heidenreich (pictured), best known as Dougie the delivery boy in the Pizza Hut commercials, is back on TV after surviving a horrific car crash and the media storm that followed. “The past couple of months haven’t been the most enjoyable, but I’ve moved on. You learn from your mistakes,” he told TV Week. “I was driving a car, I had an accident. I hurt myself, I hurt my girlfriend, I got fined — but I don’t understand why everyone was talking about it. The coverage made me laugh. I think I got more coverage than Ivan Milat and he murdered people! You just have to laugh it off.” Heidenreich, who last year starred in Ten‘s ill-fated Echo Point, is now hosting Nine‘s new children’s game show, Challenger, and is back in the pizza commercials — the latest of which co-stars Melrose Place star Andrew Shue. 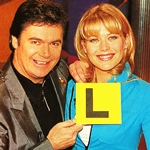 Jo Beth gets the gig!
When Jo Beth Taylor joined Hey Hey It’s Saturday at the start of the year, the cynics suggested she would be little more than a “Nineties barrel girl”. However, Taylor has proved the critics wrong and impressed Hey Hey It’s Saturday host Daryl Somers (pictured with Taylor) so much that he has appointed her as guest host of the show while he is overseas planning some US specials for later in the year. “When Daryl called me to ask if I’d like to host the show, I asked if he thought I was capable of doing a good job,” she told TV Week. “He said, ‘Yes’, and that was that.” 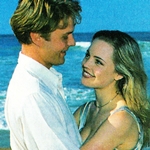 Tuesday: In Neighbours (6.30pm, Ten), the relationship between Luke (Bernard Curry) and Danni (Eliza Szonert) is continuing to sour with the influence of Steve George (Alex Dimitriades). In Home And Away (7pm, Seven), Angel (Melissa George, pictured) is finally swayed by Simon’s (Julian Garner, pictured) patience and charm. In GP (8.30pm, ABC), Yasmin (Leah Vandenberg) is pleased with herself when she diagnoses a difficult case.

Thursday: In Home And Away (7pm, Seven), Steven (Adam Willits) and Selina’s (Louise Crawford) secret is out. The special If You Have A Heart (9pm, Nine) looks at the work of Sydney’s St Vincent’s Heart Transplant Unit and follows two patients waiting for heart donors.

Friday: In the 2000th episode of Home And Away (7pm, Seven), Angel (Melissa George) and her family bid farewell to Summer Bay. Seven Nightly News presenter David Johnston hosts the special A Tribute To Port Arthur (8.30pm, Seven), presents a journey to the notorious penal settlement of Port Arthur, filmed prior to the tragic events that took place there earlier in the year. Friday Night Football (9.30pm, Seven) features highlights of Essendon versus Footscray from the Melbourne Cricket Ground.