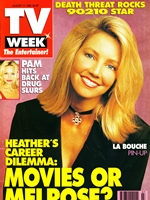 Tears for fears
The tears that you see from Tasma Walton‘s character Constable Dash McKinley in this week’s episode of Blue Heelers are real. It’s an emotional storyline in which Dash has to face up to her fears of getting behind the wheel again after seeing her best friend die in a car accident. “I didn’t find the scenes hard to do,” she told TV Week. “I like delving into that darker stuff. The situation for Dash was so traumatic and real, it was quite easy to lose myself in that and have the emotional response that Dash would have had.” 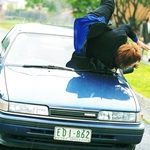 Caroline crashes out of Neighbours
Neighbours star Caroline Gillmer (pictured) is set to make a dramatic exit from the series in scenes to go to air next month. Her character Cheryl Stark is out on a walk with daughter Lolly (Jiordan Anna Tolli), until Lolly gets distracted by chasing a dog on the road. Cheryl runs after her daughter and straight into the path of an oncoming car. “The incident is a real tragedy,” Gillmer tells TV Week. “There’s a variety of reactions from Cheryl’s family and friends that are all very sad. But the greatest pain is felt by Marlene Kratz (Moya O’Sullivan), Cheryl’s mother.” In a tragic twist, the accident occurs just as Cheryl’s estranged husband Lou (Tom Oliver) is making his way back to Erinsborough after deciding to give their marriage a second chance. 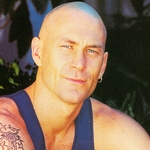 Playing doctors and nurses
Network Ten is hoping that its new medical drama Medivac will be a highlight of its upcoming drama slate. The series is set in the emergency ward of Bethlehem West Hospital and features a field of casualties while the hospital staff have dramas of their own. Medivac stars Grant Bowler (Blue Heelers), Nicholas Eadie, Rena Owen, Lisa Forrest, Genevieve Picot, Anthony Grundy and Caroline Kennison. Bowler says there are differences between his former Blue Heelers character Wayne Patterson and his new role of Dr Archibald (Arch) Craven. “This character is more free, fun-loving, and a lot more intelligent,” Bowler tells TV Week. “You know Wayne, God bless him, wasn’t the greatest of human beings. That wasn’t a conscious decision on my part, because I think there are a great many intelligent police officers in the world, but Wayne wasn’t bright and this guy is… which is nice.” 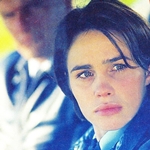 Tuesday: The 7.30 Report (7.30pm, ABC) presents a special 90-minute edition for the Federal Treasurer Peter Costello‘s announcement of the 1996 Budget, including analysis by Kerry O’Brien and commentary by Barrie Cassidy. In Blue Heelers (8.30pm, Seven), Nick (William McInnes) is surprised by Dash’s (Tasma Walton, pictured) unprofessional behaviour at the scene of a fatal accident, until he learns that both the victims were her friends.

Wednesday: In Neighbours (6.30pm, Ten), Billy (Jesse Spencer) and Melissa (Aimee Robertson) start to panic when they realise they have slept through the night and may not get home in time for her parents.

Friday: Lisa Treloar hosts the new wedding game show I Do I Do (7.30pm, Ten), where three couples compete for the opportunity for the show to host their wedding. Each couple has their families and friends in the audience, dressed in formal clothes, in the hope they will be attending the major prize — a televised wedding.