Kieren’s the king of Summer Bay
Before heading off to Atlanta to win gold at the Olympic Games, Kieren Perkins paid a visit to the set of Home And Away. “It was fantastic to meet a great Australian champion,” Home And Away cast member Kristy Wright (pictured with Perkins and co-star Nic Testoni) told TV Week. Perkins was joined on set by fellow Australian sports stars Andrew Vlahov, Grant Kenny, Lisa Curry-Kenny, Trevor Hendy and Sharon Oates to promote the Uncle Tobys Talent Towards 2000 campaign. The campaign offers students the chance to win a place at a school camp where they will be coached by top athletes including Perkins and Sam Riley. The camp also features an emphasis on performing arts, so Home And Away stars will also be giving talks on acting. Meanwhile, Kenny and Hendy recently guest starred in the series. 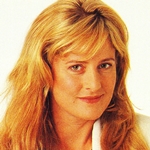 Sonia’s just along for the ride
Former Police Rescue star Sonia Todd (pictured) had to rapidly acquire some new skills for her next role as Karla in ABC‘s new series Simone De Beauvoir’s Babies. Karla rides a Harley-Davidson, and Todd did not wish to fake the bike-riding scenes. “I learnt to ride and got my bike licence two days before we started rehearsals,” she told TV Week. The four-part mini-series also stars Anne Looby, Laverne McDonnell and Sally Cooper and is about four women in their 30s who meet up at a school reunion and make a pact to have babies, whether they are in a relationship or not. 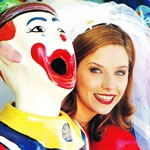 Married blitz!
Lisa Treloar (pictured) hosts Network Ten‘s new game show I Do I Do, where hopeful couples compete to win the major prize — a wedding on television in a starlit chapel. “It is far from tacky,” she tells TV Week. “The couples are there because they want to have a good time and do something different. A lot of them couldn’t afford the expense of a wedding. We help them realise a dream. We give them fabulous gowns, they get a wedding cake and we give them a fantastic honeymoon.” Thirteen couples are set to tie the knot over the course of the series. While this is Treloar’s first hosting role, she is not an entire newcomer to television. She was a reporter for Nine‘s Just Kidding and has also appeared in dramas Police Rescue and Rafferty’s Rules.

Till death do us part
Dramatic scenes in the upcoming series final of Water Rats. As the wedding of Goldie Goldstein (Catherine McClements) and John “Knocker” Harrison (Peter Mochie) approaches, the groom-to-be goes on a killing spree of witnesses to the murder of Kevin Holloway (Jeremy Callaghan), of which Knocker is a suspect. Goldie’s loyalty to her fiance is tested and the episode concludes with a gun fight between Goldie, Knocker and Frank Holloway (Colin Friels). Water Rats, a ratings hit for Nine, will return in the new year.

Monday: In Neighbours (6.30pm, Ten), Karl and Susan (Alan Fletcher and Jackie Woodburne) are shocked when Gary Collins (John Powell) pays them a nasty visit. In Water Rats (7.30pm, Nine), Harrison (Peter Mochrie), Brady (Richard Healy) and Holloway (Colin Friels) are on the hunt for witnesses to the murder of Kevin Holloway (Jeremy Callaghan). The special Forty Years Of Sport (8.30pm, Seven) takes a look at some of the greatest funniest and memorable moments in 40 years of sport on Australian television. In Pacific Drive (11.15pm, Nine), Trey (Lloyd Morris) receives another threatening letter.

Tuesday: In Home And Away (7pm, Seven), Haydn (Andrew Hill) is determined to split up Fisher (Norman Coburn) and Marilyn (Emily Symons). In Better Homes And Gardens (7.30pm, Seven), guest Alyssa-Jane Cook shows how she turned her wooden house in a stylish home. In Blue Heelers (8.30pm, Seven), Tom (John Wood) suspects an itinerant worker is responsible for a series of bashings.

Wednesday: In Neighbours (6.30pm, Seven), the frantic search for Louise (Jiordan Anna Tolli) continues, as Toadie (Ryan Moloney) and Billy (Jesse Spencer) start realising the trouble they may be in. 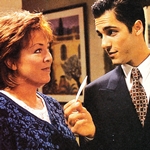