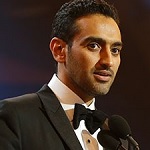 Congratulations to The Project‘s Waleed Aly (pictured), winner of the TV Week Gold Logie for Best Personality On Australian Television.

In his acceptance speech, Aly paid tribute to his fellow nominees, acknowledging that each brings something unique to the television landscape. In declaring his win as significant for diversity, he also dedicated his award to “Mustafa”, a member of the television industry who was in attendance at the Logies but who is not employed under his real name for fear that he would not have a job.

Home And Away again won the Logie for Best Drama Program, while Adam Dovile from Better Homes And Gardens won Best New Talent.

It was another win for The Living Room as Best Lifestyle Program, and The Footy Show (NRL) for Best Sports Program.

While Cam and Denyer were not to collect the Gold Logie, their respective programs — The Block and Family Feud — won Best Reality Program and Best Entertainment Program.

Aly’s Gold Logie win followed another significant milestone in Logies history. Noni Hazlehurst became only the second female, and the first since 2001, to be inducted into the TV Week Logie Awards Hall Of Fame. From a career dating back to the 1970s and programs including The Ernie Sigley Show and The Box through to Play School, The Sullivans, Nancy Wake, Better Homes And Gardens, City Homicide and A Place To Call Home, Hazlehurst has been a steadfast advocate for children’s television. She is also a former host of the TV Week Logie Awards.

Ratings for the TV Week Logie Awards telecast were a small improvement on last year, with 1,119,000 viewers across the 5 major capital cities, averaged over the lengthy telecast. Though this figure may be revised when the later than scheduled finish time is taken into account. The Logies’ Red Carpet Arrivals scored 1,060,000.

Best Drama Program: Home And Away

Most Outstanding Miniseries or Telemovie: The Secret River

Most Outstanding Children’s Program: Ready For This

Most Outstanding Newcomer – Actor: Joel Jackson, Peter Allen: Not The  Boy Next Door

Data © OzTAM Pty Limited 2016. The Data may not be reproduced, published or communicated (electronically or in hard copy) in whole or in part, without the prior written consent of OzTAM.

Permanent link to this article: https://televisionau.com/2016/05/the-58th-tv-week-logie-awards.html