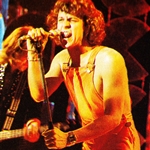 It’s January already, and that means Rage is digging through the ABC archives for its traditional month of Saturday night classics.

The month kicks off tonight (Saturday) at 11.20pm with four episodes of Countdown plus two episodes of Rock Arena. The playlist also includes a 1976 ABC station promo featuring Skyhooks‘ Shirley Strachan, due to air after 5.00am.

Permanent link to this article: https://televisionau.com/2016/01/rage-retro-month-kicks-off.html