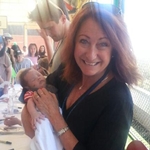 It was a big weekend for fundraising, with separate telethons in both Western Australia and Queensland.

Western Australia’s traditional Telethon was back for its 48th year and once again raised a record-breaking total — $25,854,524.

Telethon, based at the Perth Convention and Exhibition Centre, was broadcast over 26 hours through Seven in Perth and GWN7 in regional Western Australia, plus it was also streamed online for those outside of WA to be involved.

As well as Seven’s local presenters there was a thorough representation of Seven Network personalities from interstate — including cast members of 800 Words, The Chase, Home And Away (including Lynne McGranger, pictured above), House Rules, The Morning Show, Saturday Disney, Peter Allen: Not The Boy Next Door, Winners And Losers and My Kitchen Rules.

More than 1000 volunteers also donated their time to the Telethon effort.

Telethon CEO, Steve Mummery was thrilled again with the result from the weekend: “It’s been a tough year out there for everyone in Western Australia, but it feels like every single person has dug as deep as they can to help make this Telethon the best one ever. Reaching another record of $25,854,524 is something that every West Australian should be incredibly proud of.”

Meanwhile, Nine in Brisbane held the Channel Nine Telethon for the Children’s Hospital Foundation — raising $10,498,046 via its Saturday night broadcast which was also relayed to regional Queensland via WIN.

Permanent link to this article: https://televisionau.com/2015/10/telethon-weekend-raises-35-million.html