Kimberley in full cry
Kimberley Davies (pictured) told TV Week she can’t think why she is leaving Neighbours after three years. “I just am,” she said. “There’s no particular reason. It’s time to leave.” Davies also refuses to elaborate on speculation that she has landed a new job overseas. “Can’t say,” she says. “Because I just can’t. I’ll get myself into trouble.” Her final day on set ended with a speech and presentation by executive producer Bill Searle. Davies will be seen on screen until early next year. Her departure is set to leave the way open for fellow cast member Eliza Szonert to gain a higher profile.

Is Tracey’s time up at 60 Minutes?
Speculation is mounting that 60 Minutes reporter Tracey Curro is set to leave the top-rating current affairs show. Curro’s contract with 60 Minutes has expired and she is expected not to continue with the show into 1996. “Word around the station was that Tracey felt she wasn’t being looked after as well as the other reporters,” one source said. Nine’s response is that “Tracey is overseas now filming stories for 60 Minutes to screen next year, which seems to indicate a commitment to the show in 1996. Yes, her contract is up for renewal, but 60 Minutes‘ policy is never to discuss the reporters’ contracts.” Meanwhile, there are also suggestions that should Curro leave the show then Midday co-host Tracy Grimshaw may step in as a replacement. 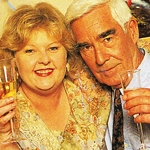 Goodbye GP!
Denise Roberts and Michael Craig (pictured), the only remaining original cast members of GP, have filmed their final scenes for the long-running drama. “I have very fond memories,” Craig told the gathering of cast and crew after the filming. “But if you’re an actor you know you have to move on at some point or another. I’m going to miss everyone.” Roberts added, “It’s so sad to say goodbye to everyone, we’ve grown to become quite a family.” Their final GP episode screens late November. 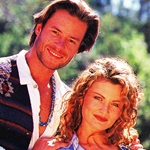 Gabrielle’s mighty comeback
Gabrielle Fitzpatrick, star of Banjo Paterson’s The Man From Snowy River, has bounced back into a starring role in Power Rangers: The Movie despite originally having to withdraw from the role due to illness. Three days before the Power Rangers movie went into production, Fitzpatrick was rushed to hospital for the removal of an ovarian cyst. Producers decided that filming could not be delayed and replaced Fitzpatrick with American Mariska Hargitay. But when Hargitay’s scenes were cut from the film, a re-shoot was required and Fitzpatrick was asked to return to the role. She is grateful for the experience but admits “the film will never win awards, but it has made a lot of money and that’s good for me. People will see my face”. In The Man From Snowy River, she plays Montana Hale, who attracts the romantic interest of Rob McGregor (Guy Pearce). “I can relate to Montana’s tomboy-like behaviour,” Fitzpatrick told TV Week. “I’ve always wanted to do a fight scene, now I have the opportunity to do some really physical things.”

Program Highlights (Melbourne, October 21-27):
Saturday: The Mercantile Mutual Cup (9.59am, Nine) is live from Adelaide Oval, featuring South Australia versus Tasmania. Cricket coverage is interrupted by the one-hour Caulfield Cup Race Day Preview (1.30pm, Nine) and then the Caulfield Cup race (3.35pm, Nine). Beyond 2000 (5.30pm, Ten) meets the family creating the fireworks for the Sydney Olympic Games; and reports on saving lives in an emergency with a simple CPR device.

Sunday: In Heartbreak High (5.30pm, Ten), Tim Beckett (Terry Serio) gets Jodie (Abi Tucker) a record deal, but part of the package is that she has to dump Con (Salvatore Coco) as her manager. Sunday night movies are The Player (Seven), Crocodile Dundee II (repeat, Nine) and Red Heat (repeat, Ten).

Monday: News program Eleven AM (11am, Seven) presents this week’s shows from Victoria. In Neighbours (6.30pm, Ten), Marlene (Moya O’Sullivan) and Colin (Frank Bren) make a decision about their future. In Home And Away (7pm, Seven), Jack (Daniel Amalm) and Sally (Kate Ritchie) confirm their feelings for one another. Highlights of the Ericsson Cup A League soccer (7.30pm, SBS). With the second series of Frontline wound up last week, the first series goes into a repeat screening (8pm, ABC). 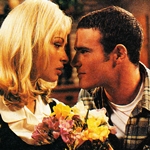 Thursday: The special Doc (8.30pm, ABC) looks at the life and work of Herbert ‘Doc’ Vere Evatt, the only Australian ever made president of the United Nations.