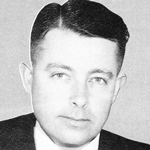 Sir James Cruthers, the man who launched Western Australia’s first TV station, has died at the age of 90.

Cruthers was working at West Australian Newspapers in 1958, when he was ordered by the company’s managing director to go to Melbourne to investigate television. “I was a newspaper man. I had never seen television,” he recalled many years later. “Bewildered, I began learning about the electronic wonder which was sweeping the world.”

As general manager of TVW Limited, Cruthers became the first television station employee in Western Australia. Five months after being sent to Melbourne he presented West Australian Newspapers’ application for a television broadcasting licence to the Australian Broadcasting Control Board.

The application was successful, leading to the launch of TVW7 in Perth in October 1959. Cruthers was later appointed Managing Director of the company and was Chairman when he retired in 1981.

During his time at TVW Cruthers established Telethon and the Christmas Pageant — both still annual events for the station.

In 1983, he became a personal advisor and assistant to Rupert Murdoch — a role he held for several years. He also served as Chairman of the Australian Film Commission and Totaliser Agency Board and was a founding member of the Australian Children’s Television Foundation.

Cruthers was knighted in 1980 and made an officer in the Order of Australia in 2008 in recognition of his service to community and charitable organisations and for services to media and the arts.

Permanent link to this article: https://televisionau.com/2015/10/obituary-sir-james-cruthers.html