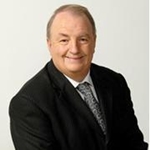 He had been placed on a breathing machine as part of his post-operation recovery, but upon receiving pathology reports his family made the difficult decision to turn off the life support. “Even if he made it through the operation the outlook was very grim,” his son James said in a statement to the media. “Thank you for all your thoughts, prayers and well wishes for my family.”

While working at 4GR he made his debut as sportscaster for Toowoomba television station DDQ10 in 1978. He presented the nightly sports report for DDQ, staying with the station as it became part of the WIN network, until a restructure saw production shifted from the Toowoomba station in 2012.

O’Shea continued to work as a racecaller at Toowoomba’s Clifford Park Racecourse and was also a presenter at local community radio station 102.7 FM. He called his last race on 22 August before going into hospital.

Permanent link to this article: https://televisionau.com/2015/09/obituary-pat-oshea.html