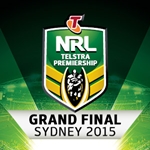 Up until today Nine had only committed to showing the Grand Final in high definition on Gem in Perth, more for reasons of scheduling due to the time difference to the eastern states and to avoid bumping Nine’s regular programming from the main channel.

This Sunday’s Grand Final is between the Brisbane Broncos and North Queensland Cowboys.

** Check local guides for times. Times above are AEDT.

** Times/Channels will differ in Brisbane, Adelaide, Perth and Melbourne.

Permanent link to this article: https://televisionau.com/2015/09/nine-follows-suit-with-grand-final-in-hd.html