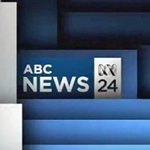 The channel, based at ABC‘s Ultimo headquarters in Sydney, launched on 22 July 2010 at 7.30pm (AEST) during the Federal Election campaign

Although ABC News 24’s daily ratings share rarely lifts above a single per cent, the broadcaster claims that the channel has an audience reach (metropolitan and regional) of four million viewers each week.

ABC has put together a package of highlights of ABC News 24’s first five years on air: