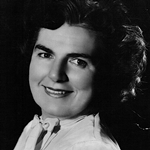 Coralie Condon, one of the pioneers of television in Western Australia, has died at the age of 99.

She passed away in the early hours of Christmas Eve at the Castledare Retirement Village in Perth.

With an interest in theatre from an early age, although she was working at the Public Works Department, Condon became known as an actor and producer around Perth theatrical circles and had also been an actor for ABC radio.

When television began in Australia she went to Sydney to write children’s programs for ABC before returning to Perth to join commercial channel TVW7 prior to its launch in 1959. She was involved in the hiring of talent for the new channel and over the next decade went on to produce various shows for TVW7 — including Western Australia’s first daytime women’s program, Televisit, which she also hosted for a time.

In the mid-1960s she produced the television adaptation of The Good Oil, a musical comedy that she had written and produced for the theatre before television arrived.

She continued to play an active role in the theatrical scene in Perth and in 1993 was granted a Medal of the Order of Australia in recognition of service to the entertainment industry.

In 2009, Condon was one of many former TVW employees to celebrate the station’s 50th anniversary.