Twelve years after Cyclone Tracy destroyed Darwin, the Nine Network embarked on a big-budget six-hour mini-series to give an account, based on fictional characters, of what happened in the days immediately before and after the cyclone ripped through the city of 45,000 people. 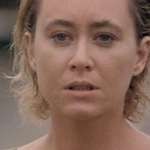 Produced by Nine’s production arm, PBL Productions, Cyclone Tracy starred Tracy Mann (pictured) as Connie, the owner of a Darwin hotel who on Christmas Eve 1974 has just paid off the mortgage. Connie is a single mother with two young daughters (the eldest played by Kate Ritchie, making her acting debut) and a boyfriend, Lt Tony Baker (Noel Hodda).

‘Little Caroline’s mother is, of course, ‘Big Caroline’ (Aileen Britton) — the owner of a general store and still deeply disgruntled over Mick’s separation from her daughter.

Steve (Chris Haywood) is a jaded journalist and writer who lives in the hotel. He is an alcoholic and contemplating ending it all. 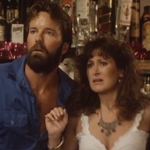 Meanwhile, heading into Darwin is smooth-talking American Harry (Nicholas Hammond, who played one of the seven Von Trapp children in the classic The Sound Of Music) with Aussie girlfriend Joycie (Linda Cropper). The pair (pictured) are involved up in a drug deal that doesn’t go to plan and they end up hitching a ride into Darwin with truck driver Theo (Nicholas Papademetriou).

Another visitor into Darwin is performer Bobby Fontaine (Jack Webster), a female impersonator who has ended up with a Christmas Eve gig at a rough pub outside of town.

As Christmas Eve approaches so too is Cyclone Tracy, although its course is not initially aimed towards Darwin. A last minute change in direction then sees Tracy heading straight for the city, though the locals are not seen to be overly concerned by the constant warnings being broadcast on radio and television. It is Christmas, after all, and warnings of an oncoming cyclone earlier in the month turned out to be not much more than a slight breeze and a bit of rain.

While some of the situations presented in Cyclone Tracy are on the predictable or even fanciful side, the series’ main strength is in its special effects. Producers excelled in re-enacting a Category 5 cyclone, with torrential rain, all manner of flying projectiles, corrugated iron being torn off roofs and homes being shredded to pieces, and in constructing a convincing post-cyclone environment where buildings are damaged and suburbia is flattened.

The producers have also added to the gravity of the post-cyclone storytelling with the insertion of real-life news footage showing queues of evacuees at Darwin airport and some of the widespread scenes of destruction (pictured). Cyclone Tracy was broadcast on Nine as its major event mini-series in the final week of ratings for 1986, before all networks went into the customary three month summer recess of reruns and B-grade debuts. It also capped off a year of some big mini-series productions to come from the commercial networks — including Seven‘s Sword Of Honour (which also featured Tracy Mann and aired only a couple of weeks earlier), Nine’s The Great Bookie Robbery and Ten‘s The Last Frontier.

Cyclone Tracy has been released on DVD. Featured extras include a nine-minute Film Australia newsreel and the 2004 Nine Network documentary On A Wind And A Prayer.