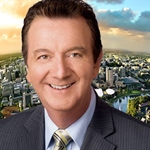 He tweeted the news of his departure from Seven earlier today.

AdelaideNow reports that Goodings, Seven’s weekend news presenter, was offered a “reduced capacity” role but instead opted to resign.

He had been with the station since 1980 when it was SAS10. He was the main newsreader for SAS10’s Eyewitness News when the station made the switch to Seven in 1987.

In 2004 he stood down when he was diagnosed with cancer. After months of treatment he returned to Seven to read the weekend news. He has recently celebrated being cancer free for ten years.

Prior to working at SAS10/7 Goodings had worked at TNT9 in Launceston and in radio at 7LA Launceston, 5DN Adelaide and 3AW in Melbourne.

So ends 34 years at SAS, a wonderful chapter of my life. Sadly I will not have the opportunity to thank my loyal followers for their support

Permanent link to this article: https://televisionau.com/2014/11/graeme-goodings-leaves-seven-adelaide.html