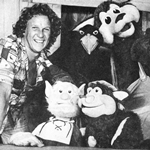 One of the most visited and commented on sections of this site is the Classic TV Guides. There are now something like 400 listings archived there, dating back to the early days of TV and covering some of the significant moments and milestones in our TV history.

In more recent times I’ve been posting random samples of printed TV guides onto Twitter (@TelevisionAU) which have also often been well received and generate some discussion within the 140-character confines of Twitter.

Now let’s take both of the above elements and see how they work in a blog environment which also allows a more comprehensive analysis of what was on.

First cab off the rank is the listing for Thursday 2 October 1980 for Sydney as published in the pages of TV Scene, which was predominantly a Melbourne-based publication but appears to have also printed a Sydney edition for a time in the early 1980s. Early morning TV was dominated by kids programs and cartoons. It seems the only place for news before midday was Seven’s Eleven AM, and a 5-minute update from Nine at 11.55am.

ABC had its usual schools programs in the mid-morning, while Maureen Duval hosted Good Morning Sydney for Ten.

Two midday movies were on offer — Seven’s The Gang That Couldn’t Shoot Straight from 1971, up against Ten’s 1969 Australian offering The Set.

The Set, starring Sean McEuan, Rod Mullinar and Gold Logie winner Hazel Phillips, told the story of a young man who goes to Sydney to start a new life after his girlfriend goes overseas. What follows is a tale of the various relationships among “the set” — the upper-class clique of Sydney which includes students, designers and artists — including a homosexual relationship between the young man, Paul (McEuan) and student Tony (Mullinar) plus an extra-marital affair for bored housewife Peggy (Phillips) with artist Mark (Denis Doonan).

Pretty racy stuff for a midday movie… at least the kids were at school. Ten toned things down a little afterwards with the 1948 film Two Guys From Texas at 1.50pm.

Nine had its successful variety show The Mike Walsh Show at midday, surrounded by US soaps Another World (at a staggering 90-minutes an episode), Days Of Our Lives, The Young And The Restless, General Hospital and Search For Tomorrow.

The 5.00pm hour is dominated by classic sitcoms and cartoons — The Road Runner Show and Get Smart (Seven), Scooby Doo (Nine) and Gilligan’s Island and Hogan’s Heroes (Ten). ABC continues the re-run theme going after 6.00pm with the five-minute Laff-A-Bits (re-purposed silent films), ’60s comedy series The Ghost And Mrs Muir and perennial favourite Doctor Who.

Seven and Ten both have an hour of news from 6.00pm, while Nine’s 6.30pm news is preceded by soap The Young Doctors. 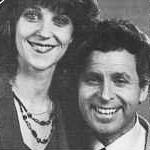 The crucial 7.00pm timeslot is a battle between current affairs Willesee At Seven, quiz show Sale Of The Century (with Tony Barber and Victoria Nicolls, pictured), ABC News and a re-run of MASH.

Crawford Productions are doing plenty for the night’s line-up, with The Sullivans on Nine followed by Seven’s drama double of Cop Shop and Skyways.

Ten’s Thursday night movie is a repeat of the 1972 comedy What’s Up Doc?, starring Barbra Streisand and Ryan O’Neal.

Late night movies date back to the 1930s with George Burns in College Swing (Seven), while Nine’s mid-dawn movie line-up goes back to the 1950s with Great Day In The Morning, Tension At Table Rock and The Planter’s Wife.

A repeat of ’70s soap Number 96 and the five-minute epilogue Something To Sing About cap off Ten’s night before close down.