All kidding aside!
The ratings success of Nine‘s new Just Kidding has handed co-host Sofie Formica (pictured) a tough choice to make. With the first series of 26 episodes completed in advance, Formica went on an extended holiday in the US. But now the Nine Network wants her to come back to do more episodes. “If we negotiate the contract that I do another series, I’ll have to go home in December — but if I don’t, I’ll be staying here,” she told TV Week. “It’s with the agents now, so I can’t say for sure I’m going to do it and I can’t say for sure I’m not. But chances are I will…” 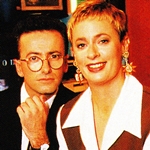 Is Denton at his wits’ end?
The ratings for his late night show Denton haven’t been brilliant, but Seven Network host Andrew Denton (pictured with co-star Amanda Keller) isn’t about to give up the game just yet. “My only frustration is that it is on at a time when a lot of people can’t stay up to watch it, which is a shame because it’s actually a pretty good show,” he told TV Week. But Denton’s career in television leaves him feeling torn — as the celebrity who does not want to be famous. “The ego trip you get from being famous is not worth the pain, in my opinion. And when I’m no longer famous, when I give this away, I’m not going to miss it for a second.” One of his long term goals is to follow in his father, Kit Denton‘s footsteps and go into writing. “I don’t know if I’ve got what it takes, but I’d like to become a really successful writer, because then you can have that joy and privilege of having your ideas out there in public and getting a response, but you don’t have to be out there yourself.” 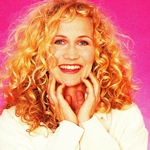 Quilter’s no quitter
Being “kicked out” after only a year at the Victorian College of the Arts did not perturb new Home And Away star Nicola Quilter (pictured) from pursuing an acting career. “I think institutions like that are really great for some people, and not for others,” she told TV Week. “But I learned heaps from it. For a while it was destructive, but it’s fine now. Actually, it’s good.” Quilter has previously appeared in dramas Chances, Skirts, Boys From The Bush, Police Rescue and Under The Skin, as well as a national tour in the stage musical Hair, before starting the long-term role as school counsellor Donna Bishop in Home And Away.

Monday: In Neighbours (6.30pm, Ten), Cody (Peta Brady) and Stonefish (Anthony Engelman) are outraged to discover that there will be no end-of-year school party. New Zealand drama series Shortland Street (7pm, SBS) makes its Australian debut. In Healthy Wealthy And Wise (7.30pm, Ten), Lyn Talbot meets The Banana Benders — a group of barber shop singers who have turned their hobby into a business; Tonia Todman shows how to create family heirlooms; Peter Wherrett finds a company that produced Cobra replicas; and Iain Hewitson prepares a minute steak with a Moroccan salad. 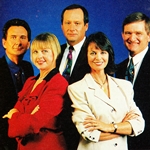 Wednesday: In Heartbreak High (7.30pm, Ten), Deloraine (Stephen O’Rourke) is honoured when Hartley High is selected to host the high-profile Education Awards, but is concerned when a visibly pregnant Rose (Katherine Halliday), a class captain, will be taking part in the event. Mary Kostakidis hosts the Ethnic Business Of The Year Awards (8.30pm, SBS) from the Sydney Sheraton Wentworth.

Friday: In Neighbours (6.30pm, Ten), Serendipity (Raelee Hill) invites Chip (Martin Crewes) over for a romantic dinner but is stood up. In Home And Away (7pm, Seven), Shane (Dieter Brummer) can’t admit that he was partly to blame for the breakdown of his relationship with his mother. Game Two of the Grand Final of the NBL Mitsubishi Challenge — North Melbourne Giants versus Adelaide 36ers — is broadcast from Melbourne (8.30pm, Ten).