A marriage of inconvenience
Richard Piper and Brandon Burke play divorced guys who share a house in Seven‘s new comedy series Wedlocked. Their characters, publisher Lex Dexter (Piper) and psychologist Chris Gilchrist (Burke), are soon joined by the outrageous Susie Abruzzo (Dina Panozzo) who agrees to pretend to be Gilchrist’s wife for a TV interview. Panozzo, known to viewers from Richmond Hill, Acropolis Now, A Country Practice and GP, is delighted with her new role which was written by co-producer Doug McLeod with her in mind. “Doug knew me from the VCA (Victorian College of the Arts) days and thought of me when he wrote this role,” she told TV Week. “The humour on the show sometimes swings out wildly, but sometimes it’s quite gentle and loving.” Wedlocked is set to cover issues including homosexuality, puberty and drug abuse. “Some of it is very controversial, to the point of travelling very close to the line,” Piper said. 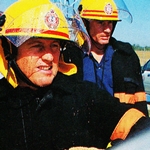 Burning desire
TV Week was on location as the cast of the Seven Network‘s upcoming series Fire were taking part in a intensive training course in firefighting. The cast, including Peter Phelps, Andy Anderson, Aaron Jeffrey, Wayne Pygram, Taylor Kane and Shane Connor, have had to take the training before production starts soon in Brisbane. “The training was strenous and it was eye-opening,” Phelps (pictured) told TV Week. “The respect you have for these guys now, well, whenever we hear a siren we stick our heads out of our hotel room and we want to be with them.” Co-star Georgie Parker, playing the show’s sole female firefighter, was unable to attend due to other commitments but completed the course at a later time. Fire is due to screen on the Seven Network in 1995. 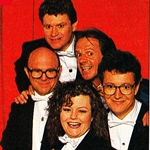 The (baby) Grand Illusion!
The new ABC series Three Men And A Baby Grand might be set behind-the-scenes of a television variety show but it definitely lacks the budget that such a show might have. “The extraordinary thing about a show like this is that it brings out the best in the depths of the ABC design, wardrobe and make-up departments,” co-star Jonathan Biggins told TV Week. “Necessity has been the mother of invention, and everyone here has responded to it fabulously.” The “three men” of the series are played by Biggins, Phil Scott and Drew Forsythe, joined by Genevieve Lemon, Terry Bader, Geraldine Turner, Peter Whitford and Bill Hunter. “I think one of the best descriptions of this show is that it’s sort of like The Muppets,” Biggins said. “It’s like The Muppets in that it’s about putting on a variety show that just happens to be on television, and all the things that happen backstage during and around the making of the show.”

Rob’s game for a challenge
Man O Man host Rob Guest has responded to comments made by Daryl Somers, host of rival Hey Hey It’s Saturday. When Somers was asked for an opinion on Man O Man, he responded, “I was surprised to see Rob Guest hosting it. I think he’s better than that.” Guest, an accomplished theatre actor, was not surprised by the comments but responded, “I guess that when you’ve been doing a show for 23 years and a show that is not expected to do well comes up and knocks you for six, then you’re not going to take it very well. So I can understand why Daryl would say things like that. People love to pigeonhole you in this business, and I think that’s why so many were upset about me doing Man O Man to begin with. Because I was doing legitimate theatre then took on a game show, they couldn’t pigeonhole me any more… they couldn’t understand how I could do both.”

“Like Seinfeld, Mad About You makes a lot out of a little — the entire pilot episode is confined to the Buchmans’ apartment. I was going to predict that Mad About You would attract a big following among couples still in their first six months of cohabitation in city apartments. But is any show sufficiently strong to drag them away from the kitchen table long enough to watch TV?”

Program Highlights (Melbourne, September 3-9):
Saturday: Afternoon sport includes the VFA Elimination Final (2.05pm, ABC) and the Major Preliminary Semi-Final of the rugby league Winfield Cup (2.50pm, Nine) while highlights of the rugby league are on ABC at 6pm. In A Country Practice (5.30pm, Ten), Jess (Jane Hall) meets with an old flame and Harry (Andrew Blackman) is jealous, but is pleased to be giving her a lift as he does his round. Bruce McAvaney, Johanna Griggs and Neil Brooks are in Rome for the Swimming World Championships (10.30pm, Seven).

Monday: Today’s topic on American talk show Donahue (1.30pm, Ten) is ‘Nudist Parents Teaching Their Kids To Be Nudists’, while the local talk show Live It Up (3.30pm, Ten) looks at ‘Living In The Future’. In Home And Away (7pm, Seven), Rob (Matthew Lilley) and Roxy (Lisa Lackey) are disappointed in the outcome of their date. In Healthy Wealthy And Wise (7.30pm, Ten). Iain Hewitson cooks a rabbit dish in front of Ayers Rock and also searches for bush tucker in Alice Springs, while Tonia Todman has some great ideas for school fetes. Ten-part comedy series Three Men And A Baby Grand (9.30pm, ABC) debuts. World Championship Swimming (10.30pm, Seven) continues every weeknight this week. 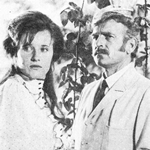 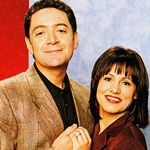 Wednesday: In Heartbreak High (7.30pm, Ten), Steve (Corey Page), whose parents are in the middle of a divorce, faces a dilemma when neither of them have plans for him in their new lives; and Stella (Peta Toppano) is worried about Katerina’s (Ada Nicodemou) romance with Rivers (Scott Major). Brandon Burke and Dina Panozzo (pictured) star in the debut of sitcom Wedlocked (8pm, Seven).

Thursday: Beyond 2000 (7.30pm, Ten) looks at a new natural medicine from the African rainforest to fight drug addiction without suffering withdrawal; and a walking wheelchair from Japan that gives mobility and independence. Rob Guest and Sigrid Thornton host the Australian Fashion Awards (8.30pm, Seven) from the Sydney Town Hall.

Friday: In Rex Hunt’s The Great Outdoors (7.30pm, Seven), guest reporter Agro puts the pedal to the metal and looks at the sport of slot-car racing; Andrew Daddo completes his journey down Highway 1; and Ernie Dingo shows hand-held navigational devices that are a must for explorers and bushwalkers.