‘It’s time to jump off the cliff again!’
A guest role in this week’s episode of GP has given actor Garry McDonald a chance to stretch his boundaries. “I felt a while ago that I was always working with the same people, that I needed certain people for a safety net,” he told TV Week. “I thought I should start jumping off the cliff again.” Playing the part of radio announcer ‘Gazza’ is also testing McDonald’s coping mechanisms since starting treatment for an anxiety disorder which saw him suffer a nervous breakdown during production of The Norman Gunston Show last year. “I’m never pleased with what I’m doing. I just have to go with the moment. I know that when this show goes to air my anxiety level is going to be very high, so I am going to have to confront this, and sit down and watch it.” In the meantime he has also been working to educate people about anxiety disorders. “I want people who have an anxiety disorder to know there is a way out.” 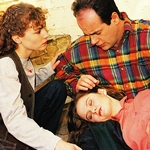 Did she fall… or was she pushed?
A murder mystery weekend of fun on Neighbours ends in tragedy when a real body is found. Julie Martin (Julie Mullins) is found dead at the base of a hotel tower, leaving everyone asking, “did she fall, did she jump… or was she pushed?” The dramatic storyline marks Mullins’ departure from the series after two years. “It’s been wonderful, but the challenge is gone,” she told TV Week. “I’ve noticed over the past few couple of months that the edge has been taken off my approach to the part, and I don’t like doing something I can’t commit to 100 per cent.” Mullins plans to complete another unit for an arts degree she is doing part-time and will be going to the United Kingdom in November for a role in the stage production Babes In The Woods.

Burke’s birthday bash!
To celebrate Burke’s Backyard‘s seventh birthday, host and producer Don Burke has thrown a party at his north Sydney home for the show’s cast and crew. Burke tells TV Week that the show has turned around the public perception of gardening. “Prior to doing this thing on television, gardening was perceived to be hideously boring,” he said. “When we first started, nowhere in the world had there been an infotainment program, and I think people didn’t know what to call us. It was a lifestyle program with a huge bent on entertainment and lifestyle. It took about five years before people came to terms with that new concept.” 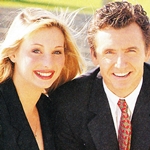 “A high-powered advertising executive with a penchant for the opposite sex, a beautiful but naive girl exposed for the first time to the big city, a handsome doctor who falls for a lovable but lovelorn homosexual, a lawyer-turned-waiter-and-womaniser… It sounds like a character breakdown for a new Aaron Spelling series but, fortunately for us all, it is not. It is, rather, just a brief sample of the characters who populate Armistead Maupin‘s Tales Of The City, screening on ABC over five Sunday nights. The difference between them and the population of, say, Melrose Place, is that Maupin’s characters are at once warm, funny, sad, frustrating, enigmatic and, above all, credible.”

Monday: In Home And Away (7pm, Seven), Jack (Daniel Amalm) is having the time of his life playing the field with three girlfriends. In Healthy Wealthy And Wise (7.30pm, Ten), Jim Brown visits Adelaide Hills to meet a local who makes steam engines designed to generate electricity; Peter Wherrett looks at back problems and a new lumber support for car seats; and Ronnie Burns looks at lighting a room and how it can change the whole atmosphere. 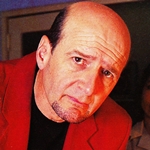 Tuesday: In Neighbours (6.30pm, Ten), Danni (Eliza Szonert) has a surprise birthday present for herself when she gets the top of her ear pierced. In Blue Heelers (7.30pm, Seven), the police find it difficult to help a woman who won’t press charges against her husband for brutally beating her. Steven Jacobs and Sofie Formica host the new hidden camera series Just Kidding (8pm, Nine). In GP (8.30pm, ABC), Ian (Tony Llewellyn-Jones) treats Rachel (Melissa Bell), the neglected daughter of a wise-cracking radio announcer, “Gazza” (Garry McDonald, pictured)

Wednesday: In Home And Away (7pm, Seven), old resentments surface between Angel (Melissa George) and Frankie (Lenka Kripac). The Movie Show (7.30pm, SBS) presents a special edition from the Venice Film Festival. Paul Clitheroe is back with another series of Money (8pm, Nine). The Seventies theatrical and performing group The Pram Factory, based in Melbourne, is profiled in a one-hour special (9.30pm, ABC).

Friday: In Rex Hunt’s The Great Outdoors (7.30pm, Seven), guest reporter Melissa Bell visits the Kooralbyn Resort in southern Queensland where she gets a lesson on skydiving; and Bridget Adams shows a rescue beacon that could be a lifesaver for people lost outdoors.