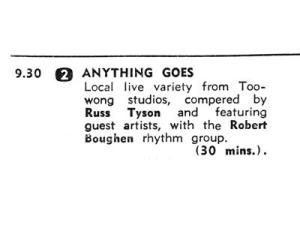 Russ Tyson, the first person to appear on ABC television in Brisbane, has died at the age of 94. Tyson was a long-serving presenter for ABC radio in Brisbane, starting as a cadet announcer in the late 1930s. When World War II broke out he went on air in Borneo with the Australian Army’s radio station. After …