Georgie’s hot new role!
The hunt for the female lead for Seven‘s new series Fire is over. Former A Country Practice star Georgie Parker has been confirmed for the role of Morgan Cartwright, the new firefighter in the squad who is forced to join an arson investigation which points to one of her colleagues in the brigade as a serial pyromaniac. Also joining the cast is Peter Phelps, last seen in Heartbreak High, Liddy Clark and Taylor Kane. Fire will be filmed in Brisbane and screen on Seven next year. 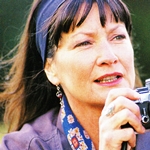 Kris clicks in GP
Actor Kris McQuade (pictured) feels the frustration common with most actors — bouts of unemployment outweighing the number of roles — but a guest role as a photographer in GP has given her a boost. “I’ve been working about once a year as an actor. The last couple of years have been very grim, but hopefully things are going to pick up,” she told TV Week. The acting work that McQuade has managed to pick up has been overseas. “The trouble is, no-one sees it here so they think you’re dead and buried. For example, I did the BBC series The Boys From The Bush. Seven stuck the first episode on in a non-ratings period, played another six, and then took it off without telling anyone. Yet it played to 53 million people in Britain.”

Tony’s anchored to the studio
After five years travelling Asia as ABC‘s Asian correspondent, Tony Eastley is now adjusting to a much different environment as host of ABC’s First Edition news program. “I was used to being out in the field, and it’s very strange coming to a studio where you are totally restricted,” he told TV Week. “When I went overseas, I got caught in some big riots in India. I was terrified. A guy near me got shot in the eye. I was appalled by it. You get used to seeing those things, but it doesn’t make them any less shocking.” Presenting the early morning news has given him some different challenges. “I never got up at 3.10 in the morning! You can’t look like a nightmare when you get to work and that’s a nuisance, because you have to be presentable to the public.”

“There was a lot to like — if not exactly love — about the first series of Law Of The Land, and that applies even more so to this second 13 hours. Now screening on the Nine Network, the second Roadshow Coote & Carroll-produced series somehow has a harder edge, a better sense of purpose. Lisa Hensley‘s Kate Chalmers still provides the occasional far-away stare at the camera to end a scene (you know, that stare they sent up so unmercifully in the Fast Forward sketch Dumb Street), but, in the main, Law Of The Land has graduated to above-average, if not riveting, television fare.” 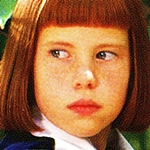 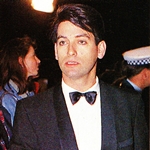 Monday: TVTV (6.30pm, ABC) returns with new hosts Mark Mitchell and Tiffany Lamb. In Home And Away (7pm, Seven), Roxy (Lisa Lackey) discovers that Rob (Matthew Lilley) has been playing her for the fool. In Healthy Wealthy And Wise (7.30pm, Ten), Jim Brown visits the dolphins at Monkey Mia, Ronnie Burns goes back to school for a lesson in music, Ross Greenwood looks at a very special form of insurance, and Lyn Talbot checks out the use-by dates on food in the fridge. In the series final of Frontline (8pm, ABC), Mike Moore (Rob Sitch, pictured) needs to find a date for the TV Week Logie Awards. Each of the women he invites is busy, so it looks like Mike may be desperate and dateless on TV’s night of nights.

Tuesday: In Neighbours (6.30pm, Ten), Cheryl (Caroline Gillmer) compromises for not marrying Lou (Tom Oliver) when she names the baby. In Blue Heelers (7.30pm, Seven), Roz’s (Ann Burbrook) actions could have dire consequences when she gets personally involved with a domestic case. In GP (8.30pm, ABC), when Martin’s (Damian Rice) colleague Keith (Alan Lock) is contacted by his biological mother (Kris McQuade), his world is turned upside down.

Thursday: In Home And Away (7pm, Seven), Irene (Lynne McGranger) has an unwelcome visitor, while Michael (Dennis Coard) is shocked by the contents of Jack’s (Daniel Amalm) wardrobe. In The Damnation Of Harvey McHugh (8.30pm, ABC), on the eve of the national election, Harvey (Aaron Blabey) unearths a massive electoral fraud. 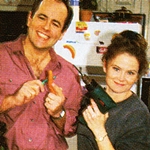 Friday: In Neighbours (6.30pm, Ten), Philip and Julie (Ian Rawlings and Julie Mullins, pictured) embark on a gender role swap. In Rex Hunt’s The Great Outdoors (7.30pm, Seven), Melissa George shows the popular sport of roller skating and meets up with Australian champion Jayson Sutcliffe, while Penny Cook gets advice on how to do face painting for children, and Monica Trapaga takes a step back in time when she visits Old Sydney Town.