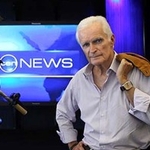 Former Network Ten journalist Harry Potter has died from cancer at the age of 72.

He was surrounded by family as he passed away on Thursday night.

Starting his career in newspapers, he made the move to television in 1978 when he joined Ten’s Sydney newsroom. For more than 30 years at Ten he focused on crime reporting and often gained exclusive access to victims, their families and criminals.

His family have released a statement:

“It is with heavy hearts that we announce our much loved husband, father and father-in-law Harry, passed away last night, surrounded by his family.

“Harry’s health deteriorated over the last month after a long battle with cancer.

“We would like to thank Harry’s many friends and colleagues for their love, prayers and support over many years.

“We particularly want to thank all the doctors, nurses and hospital staff for their incredible skill, care and dedication. You are truly amazing people.

“We were lucky to have the last month with Harry to reflect on so many wonderful times and to ensure this period was filled with love, music and laughter.

“Harry was first diagnosed with cancer more than a decade ago and the subsequent years we have enjoyed with Harry have been a blessing.

“Harry inspired us all with his tremendous fighting spirit, love of life and dedication to his family, friends and colleagues.

“Harry is the definition of a larger than life character and he will be with us forever.”

“Harry Potter was a giant of Australian journalism and devoted more than 50 years of his life to the profession. He defined crime reporting for a generation and his legacy remains a major part of the newsroom at Ten.

“Harry was in the front row of Australian police and crime reporting for the past half century and became a household name, bringing Australia’s criminal underworld and all of its colourful characters into the lounge rooms of Ten’s viewers.”

“Even though he took his work seriously, he could still laugh at himself. One of my favourite stories was a wonderful colour piece he did during the Harry Potter wizard phenomenon; it was just such a great storytelling feat.”

Potter retired in 2010 and such is his legacy at Ten that their annual Journalist of the Year award is named in his honour.

Last year he was the first to win the John Kennedy Lifetime Achievement Award at the Kennedy Awards for New South Wales journalism.

Permanent link to this article: https://televisionau.com/2014/05/obituary-harry-potter.html