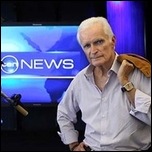 It will be the end of an era on Christmas Eve when Ten News reporter Harry Potter signs off for the last time.

The 69-year-old is retiring but is expected to continue to remain as a consultant to the network – something that he hopes will help him take his mind off more personal matters as he recovers from cancer.

Potter was diagnosed with bowel cancer five years ago.  It was treated but the tumours returned last year near his hip.  A fifteen-hour operation in February last year and five rounds of chemotherapy have followed:

“I like to think I’m in remission now but, as the oncologist said to me, ‘Your definition of remission is a bit different from ours.’ “

Potter has been with the Ten newsroom for over thirty years.  He joined Eyewitness News at Sydney’s TEN10 in 1978, where his wife, Katrina Lee, was a newsreader.  Despite his many years in the news business and covering some of the biggest crime stories in the state, he will be remembered by many for once delivering the line ‘the headless torso was found lying face down’.

Permanent link to this article: https://televisionau.com/2010/12/harry-potter-retiring-from-ten-news.html