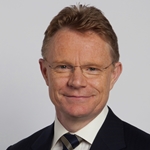 Riminton, who is currently Ten’s National Political Editor and Canberra Bureau Chief, will begin at the Sydney newsdesk on Monday 10 February.

“Who wouldn’t want to share a desk with Sandra Sully? She’s an iconic
figure in Australian television, a great survivor in a tough business and an inspiration to many people.

“We know each other well. I love her humour, her charm and her deep commitment to the news. She is a tremendous communicator and she’s great fun.”

Two weeks later, Riminton will also take over as anchor for Ten Eyewitness News Late when it returns after the Winter Olympics.

“Sandra and Hugh are two of the most respected television journalists, editors and presenters in Australia. Together, they have more than 50 years’ experience in breaking, reporting and presenting stories. No other network can match that.

“Ten Eyewitness News dominates its timeslot in Sydney and every other capital city. In Sydney, the combination of Sandra and Hugh – plus Sport Presenter Matt Burke and Weather Presenter Tim Bailey – will ensure that dominance increases.”

Riminton joined Ten in 2009, coming from five years at CNN and before then the Nine Network. At Nine he was a foreign correspondent for many years and later a presenter on Nightline, in competition with Sully then presenting Ten Late News. Since joining Ten he has provided reporting and insight across the network’s various news and current affairs programs.

Permanent link to this article: https://televisionau.com/2014/02/ten-adds-hugh-riminton-to-news-desk.html