January 1: A day for firsts

There are a number of Network Ten regional outlets hitting their first decade on air this new year.

Because South Australia (as well as Western Australia and Northern Territory) had been excluded from the federal government’s plan for aggregation of regional markets, for viewers in that area it was the first time they’d been presented a choice of commercial television service. GTS/BKN would go on to provide a Seven Network schedule with the occasional Nine program inserted.

Southern Cross Ten launched at 7.20pm with Welcome To Southern Cross Ten before picking up the Network Ten schedule from 7.30pm — two episodes of The Simpsons, movie The Audrey Hepburn Story and a New Year’s Eve edition of Video Hits came before the overnight cavalcade of infomercials.

The next day, 1 January 2004, marked the arrival of a similar secondary licence for the other regional markets in South Australia — Mount Gambier and the Riverland. Like the Spencer Gulf/Broken Hill market, Mount Gambier and Riverland are served by only one commercial operator, in their case WIN. On New Year’s Day WIN South Australia launched its secondary service, WIN Ten, providing viewers with access to a Network Ten schedule while the existing WIN station played mostly a Nine Network schedule.

The advent of digital transmission allowed WIN and Southern Cross in South Australia to subsequently provide a digital-only rebroadcast of a third network — and since the full conversion to digital television in the regional South Australia markets, Southern Cross and WIN now operate rebroadcasts of all networks’ associated multi-channels in their respective coverage areas. 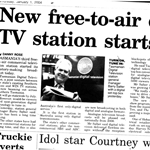 Also launched on 1 January 2004 was Tasmanian Digital Television (TDT), Australia’s first digital-only commercial channel. TDT was the first of its kind in Australia, being a joint venture between the two existing local commercial broadcasters, Southern Cross Television and WIN, to give viewers access to a third commercial network. TDT became a Network Ten outlet, with Southern Cross phasing out its Network Ten programming to become a Seven affiliate, and leaving WIN as the Nine affiliate.

Making TDT available solely on digital provided an incentive to drive up conversion rates from analogue. TDT launched first in Hobart and southern Tasmania on 1 January 2004, expanding to Launceston and northern Tasmania later the same year.

The advent of TDT led the way for other similar joint venture channels to be licenced and launched in Mildura (2006), Darwin (2008), Regional Western Australia (2010) and Remote Central and Eastern Australia (2011) where the markets are not large enough to support three competing operators.

Permanent link to this article: https://televisionau.com/2014/01/ten-years-for-ten-affiliates.html