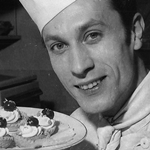 The name Willi Koeppen (pictured) might not be familiar to many, but he was a pioneer in bringing food to television well before anyone had heard of MasterChef — and his subsequent disappearance in the 1970s has undertones of an Underbelly-style drama.

Koeppen was born in Berlin in 1929 and migrated to Australia in 1956, when he was appointed Executive Chef at Melbourne’s five star Chevron Hotel.

The following year he and his wife Karin purchased the Quamby tea-rooms in Olinda, outside of Melbourne.  They relaunched the venue as the Cuckoo Restaurant and introduced Melbournians to the smorgasbord.

Many years later, in February 1976, Koeppen simply disappeared without trace.

It is a mystery that remains unsolved, although it is suspected that Koeppen was the victim of foul play.  Alex Tsakmakis, a convicted killer also suspected of other murders, is believed to have been involved in Koeppen’s disappearance.  Koeppen may have owed Tsakmakis money, and there were suggestions that he was planning to flee to Queensland.

Tsakmakis was murdered by Russell Street bomber Craig Minogue in prison in 1988.

There has never been an inquest into the disappearance and suspected murder of Koeppen.  Police are now submitting a brief for the coroner, and the Homicide Squad Missing Person Unit believe that someone may still hold vital information that could solve the mystery of the former celebrity chef’s disappearance.

Anyone with information relating to the case of Willi Koeppen are invited to contact Crime Stoppers.

Permanent link to this article: https://televisionau.com/2012/08/whatever-happened-to-willi-koeppen.html