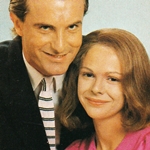 The Nine Network may have taken the recent US revival of ’80s super soap Dallas (which is due to screen on Nine later this year) as the cue to lunge into its own remake of an ’80s soapie saga, the former Network Ten series Return To Eden.

The re-telling of Return To Eden comes only a few months after Foxtel announced plans to remake another ’80s drama, Prisoner.

The original Return To Eden was a 1983 mini-series from brothers Hal and Jim McElroy, starring Rebecca Gilling with Wendy Hughes and rock star James Reyne making his acting debut.

The series was based on Gilling’s character, the rich but plain Stephanie Harper, and her apparent demise when thrown into a crocodile-infested swamp by her new husband (played by Reyne, pictured above with Gilling), who was hoping to cash in on her fortune while having an affair with her best friend Jilly Stewart (Hughes).  But unbeknownst to the others, Stephanie miraculously survives the attack but is grievously scarred.  Cue the plastic surgery, and ugly duckling Stephanie re-emerges as the glamorous model Tara Welles who seeks revenge on her husband and best friend.

The follow up series, set seven years after the original, tapped into the big hair, big clothes and big business theme that the ’80s was famous for.  While it was only a modest hit for Network Ten in Australia, it was syndicated across the US and was a big hit in Europe.  So much was its popularity there that when the series was not picked up for a second season in Australia, the producers filmed an alternative ending for screening in Europe in order to tidy up the cliffhanger storylines that were left unresolved at the end of the series.

As well as announcing the remake of Return To Eden, Nine has also commissioned another series of Underbelly — this time based around 1920s Melbourne crime figure Squizzy Taylor — and a World War I drama based around Gallipoli.

Later this year Nine will be screening new series Underbelly: Badness, House Husbands and the mini-series Howzat! Kerry Packer’s War, based on Packer’s battle against the cricket establishment in the 1970s.

Permanent link to this article: https://televisionau.com/2012/07/return-to-eden-an-80s-saga-coming-back.html