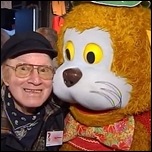 Reg Whiteman, a performer from the earliest days of Western Australian television and the man who first played the role of children’s character Fat Cat, has died in Perth at the age of 82.

An inaugural member of the WA Ballet Company, Whiteman performed as part of a dance troupe on the opening night of Perth’s first television station, TVW7, in October 1959.

He also appeared on the opening night of Perth’s second television station, ABW2, in May 1960.

Although the idea of the Fat Cat character was initiated by station executives and production staff, it was designed by Judith Byrne, wife of TVW executive Greg Byrne, as television was moving from black and white to colour.  Whiteman, who had previously played the part of Humphrey B. Bear on Perth television, successfully auditioned to don the padded ginger fur costume and bring Fat Cat to life.  It was a role that he played with dedication and at times in some uniquely challenging environments, such as skiing, hot-air ballooning or paragliding – all in costume.

Fat Cat became a regular on TVW7, appearing in programs like Children’s Channel 7, Fat Cat’s Funtime Show, Earlybirds and Telethon and in the nightly segment telling children it was time to go to bed – a feature that still appears on TVW each night at 7.30pm.

The character was also extended to TVW’s sister station, SAS10 Adelaide, where it was played by different performers on programs like the Christmas telethons, the nightly bed-time reminders and the national Fat Cat And Friends series that ran from 1976 to 1992.

Although Whiteman retired from the Fat Cat role 20 years ago, he continued to be involved at TVW7 and is well remembered for his dedication and commitment in entertaining generations of junior viewers.

Permanent link to this article: https://televisionau.com/2011/08/obituary-reg-whiteman.html