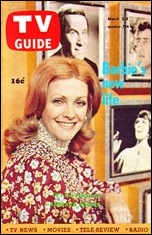 Rogers was a teenage model in the 1960s before becoming a national TV celebrity as hostess of Seven’s early 1970s quiz shows, Temptation and The Great Temptation, alongside host Tony Barber.

Launched as a one-hour daytime show in June 1970, Temptation later expanded into prime time with The Great Temptation debuting in a half-hour weekly timeslot in July 1971 – replacing the recently-departed Pick-A-Box.

The Great Temptation was later ‘stripped’ to five-nights-a-week and host Barber collected the TV Week Gold Logie in 1973 for Most Popular Television Personality.  Rogers also won Logies in 1973 and 1975 for Most Popular Female Personality in New South Wales.

Appearing on The Morning Show with presenters Todd McKenney and Kylie Gillies, Rogers also recalled a controversial incident when presenting movies for Seven.  A pre-recorded segment, with Rogers jokingly threatening to “rip the tits off” anyone who didn’t like the choice of movies presented, was headed for the end-of-year blooper reel but was accidentally broadcast and saw her banned from appearing on TV for two weeks.

Rogers was later back on TV in the ‘80s as a panellist on game shows like Celebrity Tattletales and daytime talk show Beauty And The Beast.

These days Rogers is a guest speaker for Probus… and is apparently gagging for a stint on Dancing With The Stars!

Permanent link to this article: https://televisionau.com/2011/07/barbie-rogers-in-friday-flashback.html