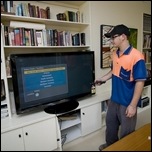 Minister for Broadband, Communications and the Digital Economy, Senator Stephen Conroy has announced the date that Regional Queensland viewers will lose all analogue  television transmission and will only be able to access free-to-air television via digital.

On 6 December 2011 all local analogue transmissions for ABC, SBS, Seven Queensland (STQ), WIN (RTQ) and Southern Cross Ten (TNQ) will be closed down.

In the latest Digital Tracker survey, covering the period January to March this year, around 83 per cent of households in the Regional Queensland market have already made the transition to digital television.

The Regional Queensland market stretches from Cairns and Far North Queensland down to Toowoomba and the Darling Downs and Southern Downs regions – representing a population of around 1,764,000.

Viewers in the Regional Queensland market who are unable to receive digital television via normal terrestrial broadcast may be eligible to access the satellite-based VAST platform, which will be available to Regional Queensland from June 2011, and some households may qualify for government assistance in making that conversion.

Permanent link to this article: https://televisionau.com/2011/05/regional-queensland-gets-digital-deadline.html