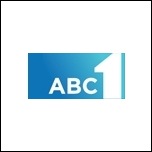 National broadcaster ABC has over the weekend launched a refreshed look for its flagship channel ABC1.

It is the first major refresh for the channel since the ABC1 brand was first launched almost three years ago to the day.

The new logo (pictured) coincides with new station identifications featuring thought bubbles and implore viewers to re-think their own perception of the channel and consider ABC1 as the place to go for entertainment, drama, comedy, news and current affairs, lifestyle, factual, sport and the arts.  The new on-air look uses a refreshed colour scheme of blue and burnt orange.

The campaign will continue with more genre-specific identifications and extended promotion during the year.

The new on-air look was devised by ABC TV Marketing and The Lab.

ABC’s second channel, ABC2, is set to get a refresh in April with the ABC For Kids brand to follow later in the year.

Permanent link to this article: https://televisionau.com/2011/02/abc1-launches-new-look-think.html