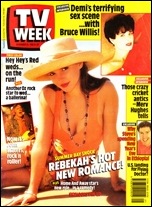 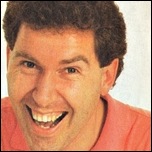 If it’s New Year this must be… Ethiopia
Tonight Live host Steve Vizard (pictured) will be seeing in the year 1991 on location in Ethiopia as he will be on location producing a one-hour special for World Vision to go to air on the Seven Network around Easter.  “I’ve never been to Ethiopia.  It will be an eye-opener.  But I think it’s a worthwhile thing to do.  It’s one of those things you can do as a personality because personalities are in a position to get people to watch something they might not otherwise watch,” he told TV Week.  Actress Rowena Wallace, who has made several trips before for World Vision, will also be involved in this latest documentary. 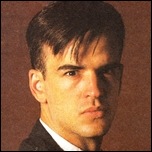 Briefly…
The Doug Anthony Allstars, one of the popular acts from ABC’s The Big Gig, are to start work soon on their own series, DAAS Kapital.  “There will be slam-bam action, high adventure, lots of violence, raw energy, sexual prowess – all that and more!” says group member Tim Ferguson (pictured).  The new series will appear on ABC and Ferguson says there has already been interest in the series from Thames Television in the United Kingdom.

Home And Away star Adam Willits has only just completed his final scenes with the popular drama and is already walking straight into his next role – appearing alongside Julie McGregor in Hampton House, the spin-off from the popular sitcom Hey Dad! A pilot for the new series has been taped and if Seven gives the go-ahead then the series will go into production in April.

Lawrie Masterson’s Sound Off
”If anything good can be said about Backchat, it’s that it at least prevents credible ABC television productions from starting at odd times such as 9.22 or 8.13.  It in fact serves to fill in time.  Some at the ABC hanker after “sponsorship” (“commercials” is still a beep word) to do that job, but while others recoil at the suggestion in big enough numbers, it’s not going to happen.  So I guess we’re stuck with Backchat… and Media Watch (which at least manages to rise above the inconsequential on most occasions, and so it should with all that staff!) and news updates, whether there’s anything to update or not.” 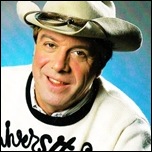 Sunday:  Sunday night movies are The Alamo: Thirteen Days To Glory (HSV7), Table For Five (GTV9) and The Long Riders (ATV10).  ABC’s Esso Night At The Opera presents the Australian Opera production of The Gypsy Princess.

Monday: Major cost-cutting measures at the Ten Network, including the sacking of around 300 staff, sees Ten Evening News in Melbourne trimmed from one-hour to a 30-minute bulletin.  The remaining half-hour is now occupied by re-runs of a US sitcom, the somewhat aptly-titled Too Close For Comfort.

Thursday:  HSV7 crosses to Sydney for the first day of the Australian Open from the Australian Golf Club.  Commentators are Sandy Roberts, Jack Newton and Bruce McAvaney.  Coverage will continue every afternoon through to Sunday.  GTV9 presents live coverage of the Benson And Hedges World Series Cup: Australia versus New Zealand.  Coverage starts at 2.20pm, taking a break for National Nine News and A Current Affair, then continuing through to 10.30pm.  HSV7 presents the last episode of Home And Away for 1990.