The new channel, operated by United Telecasters Sydney Limited (UTSL), was the second channel to launch in what was originally known as the Independent Television System (ITS) – a network comprised of ATV0 Melbourne, TEN10 Sydney and upcoming channels TVQ0 Brisbane and SAS10 Adelaide.

ITS later became the 0-10 Network and is now Network Ten.

The new TEN10 was based at newly-constructed studios in the suburb of North Ryde. And being a new channel, eight years after its rivals had launched, TEN10 was able to be built with modern equipment that would allow a greater amount of flexibility and automation in comparison to its older rivals. From opening night, TEN10’s entire on-air presentation, co-ordinating programs, commercials and other on-air content, could be driven by a single operator with the assistance of modern automation equipment – while older TV stations would have up to five presentation co-ordinators at any time. 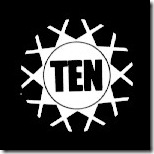 But the launch of TEN was not without its drawbacks. The new channel had been forced to postpone its official launch three times – largely due to delays associated with the construction of the channel’s transmission mast in Artarmon. The location of the transmitter was to be in a residential area, causing restrictions in the movement of large-scale equipment and materials. Construction was also affected by a transport strike, hindering the delivery of steel for the project, and a bout of bad weather.

When opening day finally did occur – 5 April 1965 – the automated Master Control was switched on by the press of a button marked “ST” at 3.30pm, putting the first programs into motion. Later that night, TEN10 viewers were treated to a lavishly-produced 75-minute musical extravaganza – TV Spells Magic. The £25,000 production, the most expensive ever in Australia at the time, featured a cast of around 250 and very few spoken words – the program was made up almost entirely of music, song and dance pieces to tell the story of the construction of a television station. 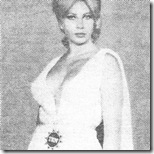 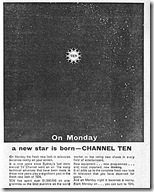 The launch of TEN10 promised a raft of new Australian programs for Sydney viewers – ranging from children’s programs Space Station 10 and Walk A Young World to a nightly news and current affairs program, Telescope, hosted by Bill Peach. TEN10 also boasted the return of local personality Ray Taylor to Sydney screens, following his move to Melbourne to host a weekly show for sister station ATV0 in 1964, and TEN10 would now relay The Ray Taylor Show to Sydney audiences.

During TEN10’s first week on air, normal programming started each afternoon at 3.30pm with documentaries and magazine segments, followed by children’s programs and serials and then cartoons, such as The Flintstones, Jonny Quest, Hector Heathcote and Astroboy, at 6.00pm. TEN offered no formal news bulletin in the evenings, instead reserving its news coverage to a brief news update leading into the late-night Telescope program. Programming would finish up each night between 11.00pm and 11.30pm.

TEN10 sold off the North Ryde studios when the Ten Network hit financial troubles in the late 1980s. The station is now based at premises in the Sydney suburb of Pyrmont.