Viewers will tomorrow (Tuesday) take for granted that many major sporting events, such as the Melbourne Cup, will be televised in some form.

However, this wasn’t always the case. Even though television flickered on for the first time in Australia in 1956, it would be another 22 years before Melbourne television viewers could see live-to-air the “race that stops a nation.”

Flashback to fifty years ago, Melbourne Cup Day, 3 November 1959. Live outside broadcasts were certainly possible but live coverage of events like the Melbourne Cup were kept off local television, presumably not to affect attendances at the venues. But Melbourne’s GTV9 did not let that deter them and they were determined to bring the result of the big race to viewers as soon as they could. 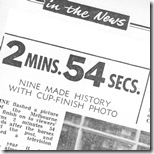 TV Times reported that GTV9 used new Polaroid technology to bring viewers a photo of the winning horse crossing the finish line a mere 2 minutes and 54 seconds after it occurred – a far cry from the half-hour it took to achieve the same feat the year before.

“We filmed the whole race on closed circuit TV, which was being videotaped in the studios, to be shown later. Cameraman Mike Browning took a picture with the Polaroid camera as the finish appeared on a monitor set. He mounted it on a card and we interrupted another program to flash it on the screen.”

HSV7 screened film of the Melbourne Cup race at 6.00pm and then, after the news, at 6.45pm screened Melbourne Cup Cavalcade, a documentary showing Cup runners in the mounting enclosure, full running of the race, presentation of the Cup and other highlights. The 15-minute program was repeated late that night. ABV2 had a Melbourne Cup special edition of its regular program Sports Page at 8.30pm.

Later that night a stroke of luck meant that the winning jockey, Pat Glennon, was able to appear in the studio on GTV9’s In Melbourne Tonight to receive the traditional gold-mounted riding whip, then to the studios of HSV7’s Bandwagon to be presented with a miniature Melbourne Cup. His original plan was “win or lose” to fly back to Adelaide as soon as the race was over as he’d promised to be home for his son’s eighth birthday. It was a disappointment for GTV9’s promotions executive Eric Welch, who had hoped to have the winning jockey on In Melbourne Tonight that night.

However, against 100-to-1 odds, his horse Macdougal won the race and his wife, thrilled at his second Cup win, had quickly boarded a plan from Adelaide to be with him. The pilot was able to radio a message to Melbourne to be passed on to Glennon. “I was just leaving for Essendon (Airport) when the message came through,” he said. He was then able to do the late-night rounds of the two TV channels. 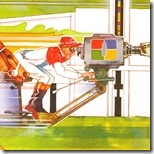 Melbourne viewers would continue to be denied live coverage of the Melbourne Cup race, although interstate viewers would eventually be allowed to watch it live. Even the advent of ATV0 in 1964, and the channel’s owner Reg Ansett having a love of horse racing, was not able to persuade any change despite the new channel pioneering live coverage of weekly race meetings from around Victoria. On Melbourne Cup Day, 3 November 1964, ATV0 did devote five hours of programming to previews of the day’s event but was still precluded from covering the race itself.

ATV0 and its successor ATV10 maintained the annual coverage of the Carnival until 2001. The Seven Network had taken over the rights to the Melbourne Cup from 2002.