TV’s reluctant Romeo
Since John Waters first hit screens as Sgt McKellar in ABC’s Rush in 1974, he has carried the reputation of being the handsome romantic, though his roles following Rush have been very different.  “I’ve got nothing against those leading man roles, but I certainly don’t want to spend the rest of my life playing them.  I prefer character acting and I try not to let my own personality dominate a role.  To me that leads to typecasting, which in my view is fatal for an actor.”  Waters has joined the cast of The Sullivans as Christopher Merchant, a soldier who meets up with some of the Sullivan family in Changi and later adds a touch of romance to the life of Kate (Ilona Rodgers).  As well as The Sullivans, Waters is continuing his recurring role as a presenter on ABC’s Play School.  “I love doing it.  It’s one of the few shows that give children something of quality and I find that tremendously satisfying.  I get letters from people of all ages throughout the year and the mail that comes in from the children is very satisfying.  They rarely ask for anything, not even an autograph, although we always send out an autographed photo.  They want to share things.  They send in pictures they’ve painted, things they’ve made, always something of theirs to share.  I find that sort of thing so rewarding.” 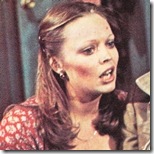 Belinda Giblin joins Skyways
Belinda Giblin (pictured), former star of Crawford dramas The Box and The Sullivans, is joining another Crawford production, Skyways, for seven weeks.  Giblin plays the part of Christine Burroughs, acting manager of Trans Asia, the fictional airline depicted in the series.  Although she began work on the series in Melbourne this week, she won’t be on screen for some months.

Upstairs Downstairs star for Aussie series
Nicola Pagett, star of the British series Upstairs Downstairs, has been signed for the romantic lead in the upcoming ABC mini-series The Timeless Land.  ABC head of drama Geoff Daniels said that Pagett’s profile in the United Kingdom and also in the United States, where Upstairs Downstairs has gained a following, should guarantee overseas sales for The Timeless Land.  The eight-part series, which also stars Michael Craig, Ray Barrett, Angela Punch and Earthwatch host Peter Cousens, begins production in November.

Briefly…
Recently-married couple Rod Kirkham, a former Young Talent Time member, and actress Barbara Llewellyn have left Australia to settle in England.  Gavan Disney, formerly Kirkham’s manager and now an executive at BTV6 Ballarat said: “They decided to live overseas.  That is all there is to it.  They have no particular plans other than getting to England.  Neither Rod nor Barbara have been exactly over-worked in Australia for the past 12 months, and both felt they had nothing to lose by giving England a go.”

Hollywood star Debbie Reynolds, whose new show opens for a two-week run in Sydney at the end of the month, will be appearing on The Mike Walsh Show over four days from 30 October.  Reynolds will also be appearing on The Don Lane Show on 1 November.  During her last tour, in 1975, Reynolds’s appearance on The Don Lane Show, including an impromptu song and dance routine, triggered a massive response by delighted viewers who jammed the channel’s switchboard.

BTQ7 Brisbane presenter Bob Janssen is preparing to set off on a unique voyage – a wet-bike ride from Queensland’s Sunshine Coast to Melbourne to raise funds for the Spastic Welfare League.  The wet-bikes, like a motorcycle on water, were first seen on a James Bond film and have been in Australia for about two years though only six are known to be in Queensland. Completing the journey to Melbourne could put him in the Guinness Book of Records. 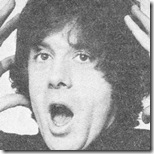 Viewpoint: Letters to the Editor:
”Well, Countdown’s Molly Meldrum (pictured) has finally pushed me to the limit.  I can’t stand it any longer, and must write to say what I think of him – which is not very much.  For a start, why does he have to put on one of his silly predictions instead of the Number 1 single of the week?  Isn’t it plain enough for him to see that the people buy the record to promote it to Number 1 spot, so they can hear and see their favourite group performing?  Secondly, he raves on and on throughout the show, so if he does play the Number 1 single you never see it all the way through because he wasted time talking about nothing.”  S. McLaughlan, NSW.

“There is a group of us who haven’t missed a Doctor Who episode for years.  But why have Tom Baker (the fourth and current Doctor Who) coming out here on a promotional tour and then screening old repeats three or four times in a row?  Come on, get some new shows going.  Doctor Who is too good to be messed around with.  The good shows get messed up and the trash they treat with respect.  I love Doctor Who too much to stand by while this is done.” C. Robertson, VIC.

“Will somebody answer this question: why can’t a nation that gave us classic movies like All Quiet On The Western Front, Gone With The Wind and Mutiny On The Bounty, produce good TV shows?  We are fed a steady diet of preposterous piffle such as The Flying Nun, The Six Million Dollar Man and Mork And Mindy.  They also give us ultra-violent shows, of which Streets Of San Francisco, Starsky And Hutch and Kojak are typical.  Furthermore, it would appear most Americans are hard of hearing, as the majority of characters in US shows scream and shout at each other like demented persons!  They haven’t yet mastered the excellent, natural, low-key type of acting that is the feature of most English TV productions.  I won’t say much about Australian TV – the least said the better.  I don’t think any Australian TV scriptwriters have had an original idea since the day they were born.” C. Rowbottom, SA.

This Fabulous Century (HSV7, Sunday) looks at the political conflicts that have stirred Australia since the turn of the century, including the infamous Pig Iron Bob clash between Robert Menzies and the waterside workers.

GTV9 presents a two-and-a-half hour special, Goodbye ‘70s Goodbye, looking back at the news and events of the 1970s in Australia. In Cop Shop (HSV7, Monday and Thursday), when a young apprentice is sacked from his job, a youth group decides to take matters in their own hands.  Baker (Gil Tucker, pictured) is knocked unconscious when he and Benjamin (Greg Ross) are called to investigate.