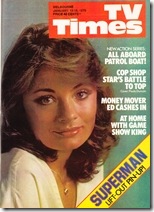 Not just bunging on an act!
Cop Shop‘s Detective Danni Francis spends her time putting criminals behind bars, but her alter ego Paula Duncan (pictured) has also spent plenty of time behind bars of a different sort:  “When I was little my parents ran hotels for a living, so I was brought up behind bars.  Right behind them – they never let me anywhere near the licenced premises.  But the atmosphere was great and life was a lot of fun.”  With ambitions of a showbusiness career dating back to childhood, she was successful in gaining entrance into the National Institute Of Dramatic Art (NIDA), but for reasons she still does not know, was not accepted for a second year.  Despite the setback, Duncan went on to appear in ABC‘s production of Pirates Of Penzance and made guest appearances as a singer on The Barry Crocker Hour before being cast in a regular role on the ABC series Certain Women in 1973.  Duncan then appeared on soap dramas Number 96 and The Young Doctors before auditioning for a role on The Sullivans.  “I missed out on the role because I was too young but Crawford Productions later offered me the role on Cop Shop.”

ABC will buy stunning Shakespeare showcase
ABC has announced it will purchase the 37 plays that comprise the complete dramatic works of William Shakespeare, to be produced over the next six years between BBC and Time Life Films in a project worth over $A12 million.  The task of presenting all 37 plays is a feat that has only been achieved in the theatre twice in the last 400 years and marks one of the most ambitious dramatic productions in the history of BBC.  No dates have been scheduled for the screening of the plays in Australia but ABC’s acting controller of programs, Grahame Reynolds, said they will probably screen at the rate of one a month.  The first play, Romeo And Juliet, premiered on BBC last month and is to screen in the US later this month.

Sesame Street Australian-style
Children’s TV programming could receive a boost with plans for a big-budget locally produced series this year.  Great Treasures Marketing, a book distribution house with global interests and headquarters in Melbourne, is said to be keen to invest in a TV production based loosely on the successful Sesame Street series.  Melbourne-based writer Stan Marks, one of the panel of judges for the Penguin Awards who criticised the standards of children’s television production, was approached by Great Treasures Marketing to be involved in the TV series project.  The project has yet to be offered to a TV network. 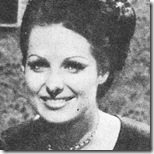 News lures Annette south
After 15 years in Brisbane television, Annette Allison (pictured) has accepted a lucrative offer to move south to Melbourne channel ATV0.  Allison was approached last year by ATV0 manager Mike Lattin, who had previously appointed her to host Brisbane BTQ7‘s daytime show when he was program manager there in 1977.  The 33-year-old will present the channel’s Eyewitness News alongside Bruce Mansfield and will also appear on the new daytime talk show Everyday.  “Everyday will go to air live and basically it’s a similar format to my previous BTQ7 show, Annette.  I think they are aiming the program at being a Women’s Weekly of Australian TV.”  Allison left BTQ7 on 7 January, fifteen years to the day since she joined the channel, and starts at ATV0 on 15 January.   “I haven’t taken this decision lightly.  I have to uproot everything and I consider it to be the major move of my life.”

Briefly…
Tim Evans, a former co-writer for The Don Lane Show, will stay behind the scenes in his new role as producer of HSV7‘s The Penthouse Club.  The show will return soon for 1979, again with Ernie Sigley as host, but auditions are under way for a new female co-host to replace Mary Hardy who left the program last year.  The program is also being expanded this year to broadcast through Victorian regional stations as well as to Tasmania.

Chris Bartlett, voice-over man for Perth-based game show Family Feud, has left for Japan to work as assistant production manager on an American TV mini-series based on the best-selling book Shogun.

Actor Michael Caton is to reprise his role as Uncle Harry in The Sullivans, but as Caton said, “it’ll be a somewhat different Harry.  He has, er, been changed by circumstances, but he still has plenty of schemes.”

A one-hour documentary on Melbourne’s massage parlours is being produced by former This Day Tonight producer John McIntosh for screening on the Seven Network.  McIntosh is the husband of Sue McIntosh, formerly of the children’s series Adventure Island and a presenter on GTV9‘s children’s program You Me And Education. 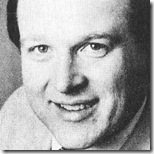 GTV9 newsreader Peter Hitchener (pictured) has settled his differences with the channel and has renewed his contract:  “I am delighted to be staying at Nine.  (Incoming newsreader) Brian Naylor and I get on well together and I look forward to an interesting and exciting year.”

Viewpoint: Letters To The Editor:
“I am so annoyed with the amount of sport on TV!  We often see the commercials about Life Be In It, and how it’s better not to be Norm – “warming the set and cooling the tinnies.”  These ads are put on for people to realise that being part of a sporting team is better than sitting on one’s backside with a cold can and watching it on TV.” E. Fogarty, NSW.

“I am writing to complain about cricket taking over the time slots of regular programs, especially Countdown!  Consider those people who live in country areas, who have no choice of channels.” R. Hurditch, NSW.

“I can no longer contain myself.  When I saw that The Quest was to be appear at 11.00pm on Monday 4 December, quite frankly, I saw red.  With weeks between episodes, altered nights and times, TCN9 should be ashamed.  Don’t the powers-that-be recognise an above average program when they see it?” V. Longhurst, NSW.

What’s On (January 13-19):
More cricket on our screens with the 2nd One-Day International on ABC on Saturday, live from the Sydney Cricket Ground, World Series Cricket on GTV9 on Saturday, Sunday, Monday and Wednesday, the final of the Gillette Cup on ATV0 on Sunday, and the Sheffield Shield on ABC on Friday.

A re-run of the historic drama Cash And Company begins on HSV7 on Saturday night.

Saturday’s late night movie on ATV0 is the 1962 thriller The Incredibly Strange Creatures Who Stopped Living And Became Mixed-Up Zombies.  The following night, HSV7′s late night classic is the 1958 sci-fi horror The Blob.

Sunday night movies are The Little Hut (HSV7), The Horsemen (GTV9) and The Family Way (ATV0).  ABC screens the telemovie She’ll Be Sweet, the fifth telemovie produced by the broadcaster in association with the US-based Transatlantic Enterprises.