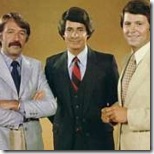 Each week during the year 2008 we featured the corresponding week from thirty years ago, 1978, as reported in TV Times magazine.

We will continue the theme into 2009 as we look at events from television from the year 1979, including:

Also, the year 2009 is going to see some significant developments as well, most notably the launch of Freeview and more digital channels. The year will also mark fifty years of television in Queensland, Western Australia and South Australia, and twenty years since the first regional market aggregation in eastern Australia.

Happy New Year to you all, and hope that 2009 will be an excellent year.  Thank you for your comments during the year and, of course, any feedback or suggestions are always welcomed.

And a reminder, too, that the blog will continue to be in slow mode for the next couple of weeks.

Permanent link to this article: https://televisionau.com/2008/12/the-year-ahead.html