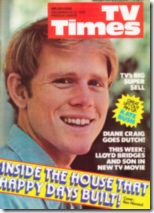 Where’s our wonder woman?
The producers of Nine‘s upcoming current affairs program 60 Minutes are looking for a female reporter following the unexpected departure of Kate Ballieu from the team due to sickness and personal reasons.  “I think it would be nice in this day and age to have a woman on the reporting team.  But in no way will she be what is actually accepted as a woman reporter.  She will not be doing so-called women’s stories,” producer Gerald Stone told TV Times.  The big budget program, based on the US program of the same name, is set to premiere early in 1979 with reporters Ray Martin, George Negus and Ian Leslie. 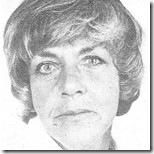 96 wouldn’t know the new-look Flo
Eighteen months after Number 96 ceased production, actress Bunney Brooke (pictured), who played the pragmatic Flo Patterson in the long-running series, has moved onto a promising movie career with roles in recent productions Dawn and Newsfront as well as upcoming titles Alison’s Birthday and Welcome Back Stranger and a telemovie A Good Thing Going.  As well as movie roles, Brooke has also been busy with appearances in TV series The Young Doctors, Kirby’s Company and Wayzgoose and in ABC plays A Visit To The Uncle and Palace Of Dreams.

Those forthcoming attractions
TV Times often receive letters from viewers who are sick of on-screen promotions for upcoming programs, but for the networks they are serious business and are here to stay.  Brisbane QTQ9 publicist Dorothea Timms said that the channel spends more than $2 million on station promotions, including labour costs and airtime. “Channel Nine’s biggest client is Channel Nine,” she said.  ABC promotions manager John Woods said that on-screen promotions have been used to success, one example being shows like British comedy The Goodies recording a ratings boost after an on-screen campaign around the theme ‘The Goodies Will Get You’.  The commercial networks have also found that heavily-promoted programs do generally perform better in the ratings with recent examples being Roots (0-10), Against The Wind (Seven) and The Godfather (Nine).

It may become three-way traffic
Australian TV producers the Reg Grundy Organisation and Crawford Productions may have a new player to contend with next year with US company Hanna-Barbera embarking on local productions in Australia, with one science-fiction and two historical dramas being considered for production.  The company will have the assistance of movie producers Hal and Jim McElroy in developing the new programs.

Briefly:
Rumours persist that Graham Kennedy may return to TV in the new year with a Saturday evening show for GTV9, and that former Penthouse ’78 co-host Mary Hardy could join him.

Trial By Marriage, a new comedy series written by The Truckies actor Michael Aitken, is to go into production in mid-1979 for ABC.

The dedication of Cop Shop actor George Mallaby was put to the test when he turned up for work with a fever and a temperature of 104 (F) and ignoring medical advice to postpone filming he stayed on set the whole day. 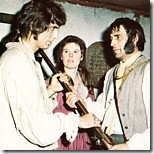 Viewpoint: Letters to the Editor
“I would like to praise the series Against The Wind (pictured).  This show was so good our family even went without our longtime favourite The Don Lane Show.”  B. Hestelow, NSW

“I would like you to know how much myself and friends enjoy The Restless Years.  We like everyone in it, and Miss McKenzie (June Salter) is a lovely person.  June Salter was also in Certain Women and was lovely.”  J. Ryan, QLD.

“Why do ABC announcers wear the sort of clothes that interfere with the colour contrast on one’s TV set? Last night I was watching Bruce Wakely telling viewers about forthcoming programs on ABC, just before station close-down, when suddenly, his tie started to turn a funny colour.  I have found similar problems with some of James Dibble‘s suits and Graham Lindon‘s shirts.  Surely ABC technical staff can do better than this?” G. Wymer, NSW.

What’s On (December 9-15)
Australia versus the World features in GTV9‘s World Series Cricket over the weekend and on Monday, Wednesday and Thursday.  On Sunday, ATV0 presents live coverage of the Gillette Cup cricket from Brisbane.

There’s also more cricket with ABC‘s telecast of the Sheffield Shield from Sydney on Sunday, Monday and Tuesday, and the Second Test, live from Perth, starting on Friday.

Seven’s tennis coverage continues every day during the week from Sydney and Adelaide, and on Tuesday, Wednesday and Thursday evenings, HSV7 presents live coverage of the Adelaide International Tournament.

On Friday night, HSV7 movie host Ivan Hutchinson presents Ivan’s Holiday Movie Guide previewing some of the movies coming to cinemas over the upcoming holiday period, including International Velvet, Battlestar Galactica, The Boys From Brazil and Death On The Nile.

Sunday night movies are He Is My Brother (HSV7), Judith (GTV9) and That Touch Of Mink (ATV0).