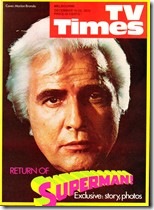 Restless break for June Salter
Actress June Salter will take an extended break from The Restless Years to tour with the theatrical production Crown Matrimonial.  The hit stage play has had an extended season in Sydney and has also played to packed houses in Brisbane and Newcastle, but a national tour was not possible unless Salter could be relieved from her commitments to The Restless Years.  Crown Matrimonial starts its three-month national tour in February 1979.

War of the words
Veteran TV scriptwriter Mike McColl-Jones has left the Nine Network‘s The Don Lane Show to work on ATV0‘s late-night Peter Couchman program which is headed for a higher profile in the new year, extending to five nights a week.  “I think Peter Couchman has that same attraction that Graham Kennedy had.  Women want to mother him.  That is a particularly good quality for a man in his job to have,” he told TV Times.

I’m not just a pretty face!
Actor Tony Bonner is feeling he has been able to shake off the stigma of the young, handsome, heroic type which he earned by playing helicopter pilot Jerry King in the ’60s TV series Skippy The Bush Kangaroo.  The Sammy Award-winning actor has had recent roles in Power Without Glory, the telemovie The Alternative and ABC play End Of Summer before taking on an ongoing role in Cop Shop.  Bonner has also directed a series of half-hour documentaries, titled Making It Together, and is preparing to play the role of a blind man in an upcoming Seven Network telemovie Image Of Death.

From bullets to ballots
Millions of viewers know Gregory Ross as Constable Tony Benjamin in Cop Shop, but to his colleagues he is known as the Prime Minister.  Ross is closely associated with the Liberal Party in Victoria and hopes to stand as a candidate in the future.  “I hope to become a full-time politician in the future, maybe three or four years.  I’ve had the ambition for some time and I am deadly serious about a career in politics,” he told TV Times.

Briefly:
GTV9‘s children’s series Nine Will Fix It recently featured a story on money being made at the Royal Reserve Treasury in Melbourne.  The crew also had the heart-breaking task of witnessing old money being shovelled into furnaces.  “That was painful!,” according to presenter Penny Spence.

The Young Doctors star Marcus Hale, an experienced motorcycle stunt rider, found himself in a real hospital after an accident while riding to work had rendered him unconscious and with deep cuts on his chest, facial abrasions and a lump on the head.  The actor recalls nothing of what caused the accident.

ABC newsman Richard Carleton is currently on a trek through darkest Africa, on his way back to Australia for the new current affairs program Nationwide.

Viewpoint: Letters to the Editor
“ABC must be mad screening that rubbish Three’s Company after only last year showing us the brilliantly funny Man About The House.  You would think the Americans could come up with something original.”  D. Builton, TAS.

“What I want to know is why TCN9 Sydney is screening so many appalling programs in prime time while really superb movies like Medium Cool and Molly And Lawless John are hidden away in late night slots?  And if it’s because they’re repeats, it won’t wash.  None of the channels has any qualms about repeating other programs in prime time.” J. Anderson, NSW.

What’s On (December 16-22):
Another week, and more tennis on HSV7 with the Ampol Men’s Challenge, South Australian Women’s Classic and the New South Wales Open filling afternoons during the week.  More cricket, too, with the Second Test on ABC and World Series Cricket on GTV9.

Christmas specials feature throughout the week, with specials from Good Times, Laugh-In, Grizzly Adams, Donny And Marie, Morecambe And Wise and The Black And White Minstrels.  On Thursday night, ATV0 screens Christmas carols from the Sydney University Choir.

Sunday night movies are All The Way To Paris (HSV7), Out Of Season (GTV9) and Operation Petticoat (ATV0).  ABC presents a Royal Heritage special on Queen Victoria.