ABC reports that the Alice Springs-based, indigenous-owned broadcaster is closing its local news operations in a round of cost cutting.   Already seven jobs are believed to have been cut with more to follow.

The cutbacks follow the station’s recent move into a multi-million dollar complex in Alice Springs and its failed bid to purchase the Nine Network‘s Darwin station NTD8.  Curiously, the bid to purchase NTD had to include a commitment to maintaining local news and staffing levels in the top end capital. 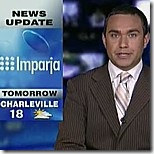 Earlier this year Imparja made significant changes to its schedule by aligning itself with the Nine Network line-up, adding the Nine Network ‘dots’ to its logo and scrapping programs sourced from Network Ten.  The station also cancelled its nightly half-hour locally-produced news bulletin, in favour of a relay of National Nine News from Brisbane, and aligned its schedule to Eastern Standard Time instead of Central Standard Time.  Local news was to be provided only via one-minute updates during the evenings and a new weekly program Footprints.

Imparja was launched in 1988 with a commitment to producing and promoting Aboriginal culture.  With the cutbacks to its local news coverage the station’s only indigenous-based production now is a weekly children’s program although Imparja does provide facilities and transmission capacity to the indigenous broadcaster NITV.

Now for around 430,000 viewers located in remote and outback Australia the only local news coverage on television can be found on bite-sized news updates on Southern Cross Seven Central, produced from a newsroom in Canberra, and the news service of the fledgling NITV whose broadcast coverage is limited.

The cancellation of local news by Imparja follows some other regional broadcasters going down a similar path, with Prime and Southern Cross Ten in much of their eastern states coverage areas providing limited news coverage that barely fulfils the guidelines set down by the broadcasting authority.  In contrast, regional networks WIN, NBN, GWN and Southern Cross Television provide more substantial local news coverage with full-scale evening bulletins across their respective regions.

Permanent link to this article: https://televisionau.com/2008/11/imparja-news-signing-off.html