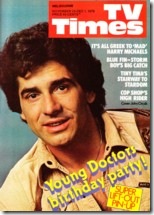 How Georgiou stays a jump ahead
The cops featured in Crawford Productions‘ police dramas are used to high-speed car chases, but actor John Orcsik (pictured) from Cop Shop is just at home on a horse.  A former bodybuilder and karate student, Orcsik for several years owned and operated a horse riding school in Western Australia: “I gave it away in the end because I was working on my body at the time and as I built myself up I became too heavy for the horses.”  Orcsik is glad to be able to include horse-riding as a skill when applying for acting roles, but it has only been called upon in the ABC series Ben Hall and in a guest appearance on Tandarra.

Mark’s taste of Hollywood
Returning from the Cannes Film Festival saw pop star and actor Mark Holden make a stop in Hollywood, and three months later he’s still there.  Originally planning to visit the US to gather songs for his new album, Holden has ended up with a producer and has been arranging and recording tracks, proposing them to record companies, and also attending an acting school.

Germaine to look us over
Aussie ex-pat Germaine Greer is heading to Australia to make a documentary on Sydney as part of the Canadian-produced series Cities Of The World.  Other cities to be featured in the series include Leningrad, Rome, Stockholm, Berlin, Toronto, Jerusalem, New York and Dublin.  The series, being produced by British-born John McGreevy, is expected to air towards the end of 1979. 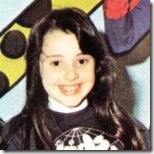 Tiny talented Tina
According to her mother, 10-year-old Tina Arena (pictured) “had been making singing and chattering noises almost from the day she was born, and when she was two we knew she would have to do something in showbusiness.”  The youngster’s penchant for singing led to her parents entering her into the Young Talent Time new talent segment.  Tina recalls, “I won the heat and the quarter finals, but I lost the semi-finals.  I wasn’t disappointed and I enjoyed myself, but it was a complete surprise when Johnny Young asked if I would join the team. ”  The young star is hopeful of an acting career when she is older.

Briefly:
Staff at Melbourne’s ATV0 have been amused by the placement of sets for the new series Prisoner.  The replica prison wall, exercise area and vegetable garden are all located next to the channel’s administration offices. 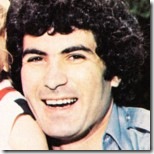 Former Number 96 star Harry Michaels (pictured) is celebrating the first anniversary of his weekly daytime variety program Greek Affair which he hosts and produces for the 0-10 Network.  The program is also screened in Cyprus and Michaels is also negotiating to sell the program to the United Kingdom, Canada and the United States.

ABC sports commentator Norman May has tipped England to win the Australia-England Test Series which starts in Brisbane this week.  Joining May on ABC’s summer cricket coverage will be former Test captain Bobby Simpson, Keith Miller and Frank Tyson.

Viewpoint: Letters to the Editor:
“ABC has one big weak point.  It does not show good quality full-length movies on a regular basis.”  D Irving, NSW. 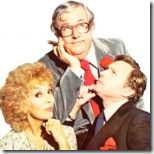 “What is wrong with the stations they they spend thousands on such rubbish as Micro Macro (pictured) and Blankety Blanks?  They are an insult to the average person’s intelligence.  Do they really think we are so dumb?”  A McCallum, VIC.

“I’d like to see foreign films on TV (with subtitles of course), and every TV station having its own theatrette in town, to take the place of ‘news theatres’.  Why shouldn’t someone, who has an hour or two to spare, be able to pop into a mini-theatre to pay to watch on a maxi-screen, the program that they could have been watching had they stayed at home.”  P Cunningham, NSW.

What’s On (November 25-December 1):
The Seven Network‘s summer tennis coverage begins with the Queensland Open from Brisbane on Saturday and Sunday, followed by the Federation Cup, the women’s equivalent of the Davis Cup, from Monday through to Friday, live from Kooyong in Melbourne.

The Nine Network’s usual daytime line-up of US soap operas takes a break for summer, with re-runs of Australian dramas Division Four and Silent Number appearing in the schedule.

The 1978-79 season of World Series Cricket starts on Tuesday with Australia versus the West Indies, telecast live from the Sydney Cricket Ground, on GTV9 from 2.20pm through to 10.30pm.  The following day features Australia versus The World.

On Wednesday night, HSV7 presents a repeat of the one-hour special John Denver In Australia, while ATV0 screens a repeat of the Holiday Survival Test showing viewers how to avoid common accidents over the upcoming holiday period.

The first cricket Test, Australia versus England, starts on Friday with live coverage on ABC from the Brisbane Cricket Ground.  Coverage starts at 11.50am and continues through to 6.30pm.