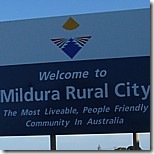 The north-west Victorian city of Mildura is set to lead the state into the world of digital-only television.

The Age reports today that Mildura is to be earmarked as the first region to have analogue signals switched off in early-2010, with the rest of the state to follow a year later. 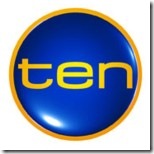 Mildura has been selected as the pilot market for the transition as it currently has a high market penetration of digital tuners, estimated to be around 70 per cent, largely due to the region’s third commercial TV station, a relay of Network Ten, being broadcast locally only on digital. Mildura is one of only three markets in Australia to have a digital-only commercial TV signal, the others being Darwin and Tasmania which both also have Network Ten outlets broadcasting exclusively in digital.

The switching off of analogue television in a smaller-sized market like Mildura will also highlight any issues that may need to be addressed by the time capital city and other regional sites are affected.

The Government has set a deadline of 31 December 2013 for all analogue services to be shut off nationwide. The full timetable for shutting down analogue services is expected to be announced by Communications Minister Stephen Conroy this week.

Permanent link to this article: https://televisionau.com/2008/10/mildura-to-lead-digital-switch.html