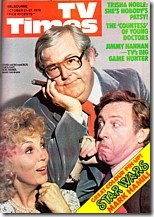 Jimmy’s still playing the game
In 22 years of TV, Jimmy Hannan has hosted more than twenty shows – including Celebrity Squares, Spending Spree, Split Second, Say When, Generation Gap, The Jimmy Hannan Show, Saturday Date and Let’s Make A Deal – but since Nine axed Let’s Make A Deal a year ago, the “eyes and teeth” of Australian TV has rarely been seen on screen. But Hannan is not lying low, instead he is spending his mornings hosting a radio show on 2GB Sydney and has just started as a panelist on the new ABC game show Micro Macro. And the father of four who rose to fame as a champion contestant on Australia’s first TV game show, Name That Tune in 1956, has an untold ambition to be an actor. “I’m starting acting lessons next year,” he told TV Times. (Pictured: Micro Macro‘s Carol Raye, Noel Ferrier and Jimmy Hannan) 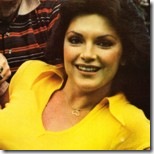 Trisha’s nobody’s Patsy
Former Bandstand favourite Trisha Noble (pictured), now based in the US but currently visiting Australia, finds herself living a double life. Although she is known as an actress in Hollywood, with recent roles in TV series including Executive Suite, James At 15 and Husbands And Wives and as a call-girl in an episode of The Mary Tyler Moore Show, Noble is keen to shake off her image as the sweet, little gingham-gowned Patsy Ann of Bandstand. “I want so much to come back to my own country to do a strong, solid role which will once and for all get Patsy Ann off my back.”

Sales plan for Wherrett series
Negotiations are already in progress to sell Peter Wherrett’s big budget series on the history of the motor car internationally. The ten-part series, Peter Wherrett’s Marque: 100 Years Of Motoring, is still in production and not due to screen on ABC until the new year. Wherrett has told TV Times, “a lot of interest has been shown and negotiations are going on in North America and England. We hope it will be the first ABC series to crack the overseas market in a big way.” Wherrett also told TV Times his enthusiastic plans for a new series, potentially titled Highway One, which will follow the highway from Cairns to Darwin, circumnavigating Australia, but just needs the money to make it happen. 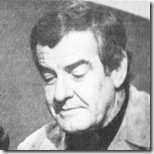 Briefly:
Malcolm Searle (pictured), host of the new 0-10 Network game show Pyramid Challenge, told TV Times, “I’m enjoying this more than I’ve ever enjoyed any TV work. But I won’t be destroyed one way or the other when the show eventually finishes.”

Rock singer Doug Parkinson is about to embark on a new role in soapie The Young Doctors, playing the manager of a country and western singer, to be played by 20-year-old Kim Durrant.

At a recent cast party to celebrate the first birthday of The Restless Years, TEN10 chief Ian Kennon announced that the network has chosen to renew the series for a further twelve months.

Viewpoint: Letters to the Editor:
“When will the 0-10 Network realise that Blankety Blanks is the most boring show on TV?  Graham Kennedy wants a rap on the knuckles and told to get on with it. It should be a fast-moving show.” A. Wilton, QLD.

“I eagerly sat down to watch ATV0‘s late movie The African Queen, as advertised in all TV guides.  But I had made a sad mistake, for The African Queen was obviously of secondary importance. Of primary concern was Ross D Wyllie and his endless rambling concerning mindless trivia. I realise ATV0 is a commercial channel and Mr Wyllie has to earn a living, but really!” H. Boer, VIC. “What a great pity it is that ABC did not make that fine series Against The Wind (pictured). We would have been spared the excessive ads which break the concentration of the viewer.” M. Nolan, NSW.

In a repeat of GTV9‘s The Paul Hogan Show, Paul Hogan and his team send up Number 96 and Pot Of Gold. Delvene Delaney joins Strop (John Cornell) and Hoges to discover the hazards of health clinics.

Barry Creyton and Kate Fitzpatrick are guest panelists on ABC‘s Micro Macro.  Followed by A Visit To The Uncle, the final episode of the comedy series Tickled Pink on ABC, starring Barry Otto, Max Gillies, Bunney Brooke and Johnny Lockwood.

This Is Your Life host Roger Climpson is joined by Annette Allison and Mike Higgins to host the Miss Australia 1979 contest, live from Brisbane, screening on HSV7 on Friday night.  In the same timeslot, ATV0 presents 21 Hours In Munich, a special movie presentation tracing the events at the 1972 Olympic Games which saw Arab terrorists kill two Israeli athletes and taking nine others hostage.