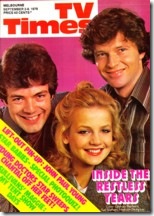 Inside The Restless Years
Every Wednesday morning, Reg Watson from the Reg Grundy Organisation and Dennis Spencer from the 0-10 Network sit down to watch the latest episodes of The Restless Years and give their post-mortem on the show – keeping a close eye on all aspects of the show including actors’ performances, technical quality, sets and continuity. Meanwhile, among those behind the scenes there are eight scriptwriters mapping out the direction each of the characters takes. And there is a constant stream of actors and actresses through the TEN10 studios as production continues… (Pictured on the cover are, from left, Malcolm Thompson, Sue Smithers and Graham Thorburn)

SA trial for news program
ABC is preparing a four-week trial run for its new local current affairs program, Six O’Clock Statewide, which is intended to run in each state as one-hour lead-in to ABC News. The trial is being run only in Adelaide but if it gets the green light after the trial, Six O’Clock Statewide will form part of the national broadcaster’s revised current affairs line-up next year which will see the launch of Nationwide as the replacement of the long-running This Day Tonight. 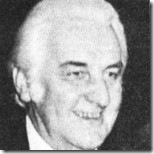 TV Violence: Case for the defence
Following last weeks TV Times‘ special report on violence on television, TV producers and executives give their views on the issue. Crawford Productions chief Hector Crawford (pictured) tells TV Times, “I don’t know of any evidence that would lead me to believe that violence on TV has any detrimental effect on normal children.” Ian Holmes, managing director of the Reg Grundy Organisation, also responded: “There has been so many studies in this area in all parts of the world, and there is no obvious, clear-cut informatiion as to what affect violence on TV has on children.” The Nine Network‘s Len Mauger said that context is important when portraying violence on television – and that parents need to take an active role in controlling what their children are watching on television, particularly programs shown in adults-only viewing times. 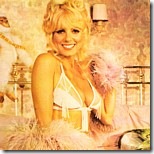 Anne will wear wrinkles – or bust!
Busty blonde bombshell Anne Semler (pictured) says that, despite her curvy, sexy image, she would love to play someone like Grammy Clampett of the US series The Beverly Hillbillies! Semler, who has had minor roles in Number 96, The Young Doctors, and is about to appear in ABC telemovie She’ll Be Sweet, admits that she would love to take on more comic roles: “After all, this” – referring to her more physical attributes – “isn’t going to last forever.” She’ll Be Sweet is one of six telemovies being produced by ABC in partnership with American-based Transatlantic Enterprises.

Just briefly….
Many of the cast and crew from The Young Doctors are down with colds and flu!

The 0-10 Network has renamed its proposed new drama Prisoner – though not to be confused with the English program The Prisoner starring Patrick McGoohan.

Frank Gallagher, one of the key players in the upcoming mini-series Against The Wind, has a guest role this week on Cop Shop.

It seems unlikely that Happy Days star Henry Winkler will be interviewed by Don Lane via satellite as his Australian film distributor will not share satellite costs.

Viewpoint: Letters to the Editor
“Night-time TV is disgraceful. I’ve had enough of police series such as The Rockford Files, Cop Shop, Starsky And Hutch, Charlie’s Angels and so on. Unless you’re a fan of The Restless Years – which is about as interesting as a cake of soap melting – there is nothing worth watching at night.” A. Lumley, NSW.

“To people complaining that Soap is “vulgar” and “sick” – did they ever watch just one episode of any of the real soapies on TV, such as Number 96 and The Box and the daytime serials? What is merely talked about on Soap, the others left nothing to the imagination. Soap is a satire about such serials and is not meant to be taken seriously as some people seem to take it.” A. Whitehead, SA.

“I am sick of people whingeing about things they don’t even have to look at!” (name and address supplied)

What’s On (September 2-8)
HSV7 on Monday night has The 1978 Truth-CUB Cazaly Awards, live from the Southern Cross Ballroom in Melbourne and hosted by Peter Landy and Lou Richards. The Cazaly Awards promises the biggest and richest awards in football, with prizes totalling $25,000.

Wednesday 7.30pm is again dominated by variety specials on the commercial networks – a one-hour Cher special on HSV7, Frank Sinatra – The Main Event on GTV9, and a repeat of the 1978 Australian Popular Song Festival on ATV0.

This week’s Inside Story on ABC features the rise of Dick Smith whose electronics business has grown from nothing to an operation turning over $14 million.

ABC‘s weekend sports coverage includes everything from Drag Racing from Calder Raceway in Victoria, repeats of World Cup matches played earlier in the year, the first semi-final of the Sydney Rugby League and – brace yourself – half an hour of the 1978 World Chess Championships!

Sunday night movies are Travels With My Aunt (HSV7), Anastasia (GTV9) and Wait Until Dark (ATV0). Australian tenor Jon Weaving is choosing the songs on this week’s Capriccio! on ABC.