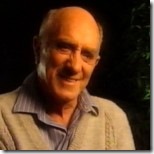 Former ABC gardening presenter Kevin Heinze has died after suffering a heart attack on the weekend.  He was 81.

Before there were backyard blitzes and makeovers, Jamie Durie, Don Burke and even Gardening Australia, there was Kevin Heinze presenting his weekly fifteen-minute Sow What program, one of the first on Australian TV dedicated to gardening.  The program was taped from his own garden in Melbourne’s outer east.

Even after the demise of Sow What, Heinze continued to present a gardening segment on ABC radio station 3LO (now 774 ABC) up until 2004.

Heinze and his wife Jill were also involved in promoting gardening in schools, and in the ’70s established a recreational gardening centre for people with disabilities.

In the 1996 special to commemorate ABC’s 40th anniversary of television, Heinze recalled that he was approached to host the program while working for the City of Melbourne.  He asked the council for permission, and they allowed him to host the program as they felt it would “only last a couple of weeks.”

The program screened every Friday night, and repeated on Sunday afternoons, for almost twenty years on ABC in Victoria, from 1967 to 1988.

Permanent link to this article: https://televisionau.com/2008/09/kevin-heinze.html