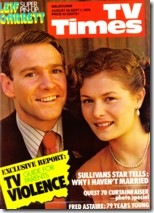 Megan Williams’ views on marriage
The Sullivans actress Megan Williams (pictured, with co-star John Walton) has good and bad news for Australian men. The good news: she is a romantic. The bad news: she is in no hurry to marry or settle down. The 21-year-old who shot to national fame in the teenage soap Class Of ’74, followed by a role in the stage production of Wonder Woman, is tackling a more serious role in playing Alice Morgan in the 1940s war time drama: “I know I have a lot to learn about acting, and The Sullivans is helping a lot.”

TV Violence: A Special Report
The average school-leaver has spent more hours watching TV than in school – a statistic that has parents, teachers, governments and even TV executives concerned about what TV is teaching children and how it affects their development. Research conducted on school-age children in Western Australia found that 5-to-8 years olds were watching TV more than their older and younger counterparts, and that they are predominantly being led to believe that we are living in a mean and violent society, and that by watching predominantly American programming that this may be affecting their notions of what Australia is like as a society. 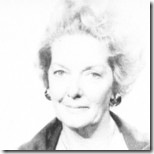 Just Pat’s cup of tea!
Former Number 96 star Pat McDonald (pictured) and Sue Jones, recently seen on ABC‘s The Truckies, have won the lead roles in the new comedy series The Tea Ladies, to be produced in Melbourne for the 0-10 Network. The series revolves around the team of tea ladies serving tea to Members of Parliament. For McDonald, the new role will be a welcome change from the dotty Dorrie Evans who was part of Number 96 for its entire five year run: “Edna is a completely different character part. She is nothing like Dorrie.” The Tea Ladies is being produced by Maurice Murphy (whose credits include Aunty Jack and Alvin Purple), and written by British writers Ray Galton and Johnny Speight, with additional topical material being provided by Australian writers. 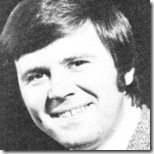 Zero hour for $2m venture
The Nine Network is putting the finishing touches to its ambitious new current affairs program, 60 Minutes. Executive producer Gerald Stone has announced his team of eight producers and four reporters – ABC‘s New York correspondent Ray Martin (pictured) and former A Current Affair reporters George Negus, Ian Leslie and Kate Baillieu – for the new show expected to debut later in the year. Among the producers for the program are Peter Meakin, formerly of TVW7 Perth and TEN10 Sydney before joining Nine’s A Current Affair, Gordon Bick, one of the founding members of ABC’s This Day Tonight and also formerly of Four Corners, and former This Day Tonight and Holiday reporter Jeff Watson.

TV probes jail, hospital dramas
ABC has announced plans to produce a documentary series about hospitals. The network has held discussions with a Sydney hospital about the feasibility of producing a series following the day-to-day operations of the hospital. The program, to run for six episodes in the new year, is expected to cover surgical, casualty and geriatric wards as well as industrial relations and perhaps some of the lives of some of the doctors and nurses. ABC has also taken cameras inside Parramatta Jail for a BBC program Jailhouse Shock, which also follows a rehabilitation scheme being adopted in an American prison.

Viewpoint: Letters to the Editor:
“I would like to congratulate Roger Climpson and the producers of This Is Your Life for featuring someone like Dr William McBride, who has done so much for science, instead of nearly always having politicians or actors.” M. Ford, SA.

“Lately there’s been a lot of fuss about the conversion to metrics. Although personally I am against this conversion, I would be interested to know why, in quiz programs (in most cases), they still use the imperial measurements. I have just been watching It’s Academic with Sandy Roberts and always there were many occasions where metrics should have been used, not once were they. This is hardly fair to the young contestants when they are getting metrics pushed down their throats by their teachers and the media.” P. Newey, SA.

“I enjoy watching the live telecast of Sydney Rugby League, but have to turn down the sound to cut out the inane and unfair comments of Reg Gasnier and Rex Mossop.” J. Watson, NSW.

HSV7 presents a documentary Woodchipping: Can We Afford It? New techniques of using forests for woodchipping is having a drastic effect, and this two-hour special brings to the Australian public the significance of woodchipping and its long-term effects on Australia.

Wednesday 7.30pm seems to be a programming void with all three commercial channels offering one-off specials: Lindsay Wagner – Another Side Of Me (HSV7), The Great Moscow Circus (GTV9) and Paul Williams In Concert (ATV0).

Sunday night movies are The Defection Of Simas Kudirka (HSV7), F. Scott Fitzgerald And The Last Of The Belles (GTV9) and the ‘modified TV version’ of Sunday Bloody Sunday (ATV0). Actor John Waters is the guest on ABC‘s Capriccio!, joining Jennie Cullen, Rod Dunbar and Geraldine Turner in singing songs by Jacques Brel.