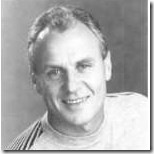 Is there no stopping Alan Dale?  For twenty years he was the stalwart of Aussie soaps with long-running roles in The Young Doctors and Neighbours (as Jim Robinson, pictured).  Then he went overseas and has continued to pop up on our screens ever since – 24, The OC, Lost, The West Wing, Ugly Betty and Torchwood, just to name a few, before coming back home for the second series of Nine‘s Sea Patrol.

Now the New Zealand-born actor has signed up to appear in the UK ITV1 network’s satire Moving Wallpaper and its new companion production Renaissance which replaces soapie Echo Beach (which co-incidentally starred one of Dale’s former Neighbours off-spring Jason Donovan) which was not renewed for a second series.

Renaissance, a “completely and utterly ridiculous” send-up of the horror genre, will feature Dale and British TV presenter Kelly Brook as airline passengers whose plane is attacked by zombies.

The second series of Moving Wallpaper, to screen on ITV1 in the new year, will again feature producer Jonathan Pope (Ben Miller) as he now heads the team behind Renaissance.

It is not known when ITV1 will schedule Renaissance, but unlike Echo Beach it will be a one-off production which will not be shown back-to-back with Moving Wallpaper .

The first series of Moving Wallpaper and Echo Beach have just finished their run in Australia on ABC2 but are available to download via ABC iView.

Permanent link to this article: https://televisionau.com/2008/08/alan-dale-attacked-by-zombies.html